Let me just say right now that I have never driven in Athens (and as you all know if you've been reading along, I have still never driven in Athens, but being in the front passenger seat is still pretty darn close), but it is an experience like none other. It has its similarities to Rome, but like a comparison between the two countries, Athens driving seems a little rougher around the edges, a bit more frenetic, maybe even a bit more dangerous. But not really. Somehow it all works itself out, everyone seems to take care each of other, and no one seems to get too worked up about things. Unless you don't anticipate a green light. It starts innocently enough, just a little blurt of a horn to let you know the light is now green, but wait more than a second, then all hell breaks loose. Horns start blaring, people holler, bikes and scooters fly by.
There are no pretences in Greek driving. If you need to get somewhere, even if it's across three lanes of bumper to bumper traffic, you go somewhere. If someone needs to get across three lanes of traffic, well, he/she must have a pretty good reason so you let him/her do it.
The nutty thing for the uninitiated is that there are very few overhead signs letting you know what the major routes are, and street sign placement is not an organized science. Many are placed on the side of a building at a street corner. No building on that corner? Wait till the next corner, maybe you'll get lucky. When you do find one, which after some practice in locating them you usually do, it may not include the English lettering along with the greek. And if it does, it may not be spelled them same as on your map. It's like code-breaking at 50 miles an hour in a confined space with no coffee break, someone sitting right beside you bemoaning the fact that he has no idea where you are, where you have been, or where you are going, or else he's shouting 'Turn here!!' without mentioning which direction 'here' is.
On the way into the city on the big highway, Laura tried to pass an army truck full of army guys in the back. Some joker in the fast lane doing 150 came flying out of nowhere to give Laura a blast of his horn and Laura jumped back in to our lane rather awkwardly behind the truck full of army guys. They all had a big grin on their face and they all seemed to be looking at me. My return glare made it clear that if I had half as many weapons of mass destruction strapped to my body as they did, we'd already be where we were trying to get to.
We got lost more than a few times in trying to find our way to the Europcar office downtown. With the help of a guy at a gas station (who showed us on the route on the map, then when he saw us still standing in the middle of his parking lot a few minutes later staring at the map, he came over and said, "okay, forget the map, you go this way, turn right then go until….." etc. He then got to work filling up something and almost got run over by someone else!), we managed to miraculously (I do not use that word lightly) make our way to within one block of Syngrou Avenue, where I asked a newsstand guy where we were now. This time when he pointed, it was a very direct point, not a vague towards the moon kind of point like the elderly couple near Megalopoli. One block, he says. Brilliant.
We made it on to Syngrou, flew by the Europcar office, turned at the next block and found ourselves at dead end. I got out and ran to the office and the guy told me I can park it anywhere on the street. There was no room on the street, but that was a minor detail. We unloaded most of our bags with our friends (who had been following us through all of this), and tried to get back to the office. Not easy. We got back on to Syngrou only to find out you can't do a u-turn. We obeyed the law for about 2 kilometres (we are Canadians, after all) then did our u-turn. Then went the wrong way. Then found our way from another way, then arrive at Europcar and parked in the middle of a crosswalk. Finally, we were in Athens.


After 20 minutes of paperwork, and a call to our apartment guy, and I drove off with John and the bags while everyone else walked. We got there on our first crack. John double parked (like 40 percent of the other unoccupied cars in Athens), and I ran over to find Liana and Penny waiting for me. I apologized profusely for being late, they smiled considerately and brought me up to the apartment, and it is fantastic. Bright, clean, balcony, bathtub, and a washing machine. It's perfect. I mean, really nice. 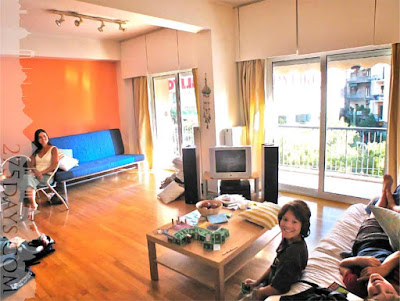