Some city names have a certain allure that makes your skin tingle a little bit, depending on your sensibilities. Paris. Rome. Istanbul. Damascus. Mumbai. They all bring to mind a certain feeling.
Venice is yet another of those cities with connotations all its own. Is it really that crowded? Is it really that beautiful? Is it really worth going?
Well, when it's March, and you are lucky enough that the sun shines every day, and the temperatures are warm, the answer to all of these questions is all that you could hope for.
Venice in March is by no means devoid of tourists, but outside of St. Mark's Square, you'll find plenty of lanes that aren't filled with camera-toting tourists. Some people find Venice to be far too touristy for their liking, but I wonder how many who hold that opinion only visit for the day, or only visit the main tourist sites of the city?
We arrived in Venice at noon on a Sunday near the end of March, welcomed by a perfectly clear blue sunny sky and a temperature of 20˚C. The boat trip from the airport in the Alilaguna boat with windows covered with salt splashes was uneventful, but pleasant enough once we got into the city's canals. 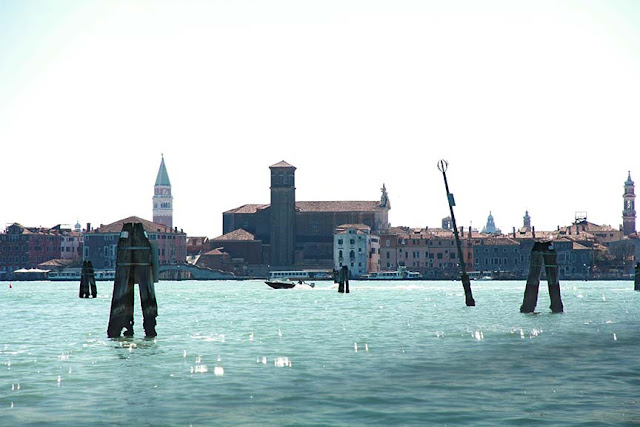 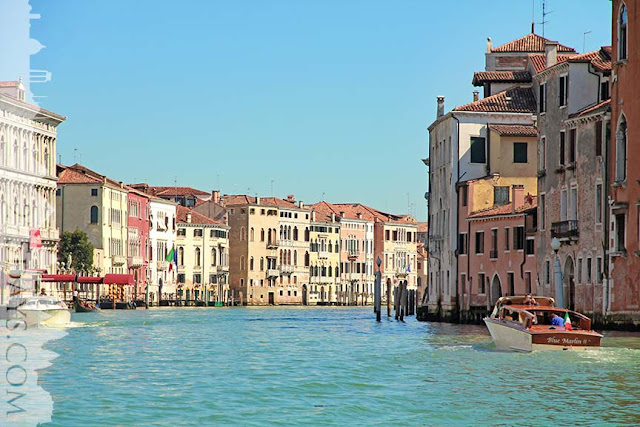 Giacomo met us at the Sant'Angelo vaporetto stop, and walked us to our apartment in the heart of the San Marco area. He explained the workings of the apartment, then looked at the top of my brow and warned me to be careful in the very low-ceilinged bathrooms (yes, plural!). Off he went, and we unpacked a bit, headed to our balcony to look over the city, then raced over to the Simply Punto to get some groceries for the week. Alas, this market is closed early on Sundays, so we carried on a little further to the Coop, conveniently located right along the busy and somewhat frenetic Grand Canal. Yogurt, milk, a bit of fruit and some veggies (use the little plastic gloves and be sure to weigh everything), and then back to our apartment before venturing out again into this sunny jewel. 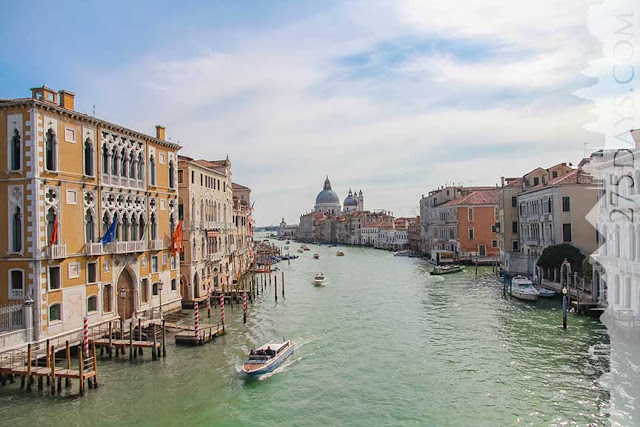 Over the Accademia Bridge for the view that I simply could not wait for, and then some strawberry gelati, and a walk along the Zattere to the point, and back to the Basilica di Santa Maria della Salute for a little sit-down. Before jet lag fully took hold on the streets, we headed back to the apartment and went straight to sleep.
With a full week in Venice before us, we were in no hurry to do everything all at once, but we might as well start with some of the big ones - the Doge's Palace and assorted St. Mark's museums. The palace is pretty much everything you might expect, with sensational gold ceilings and paintings and frescoes everywhere. 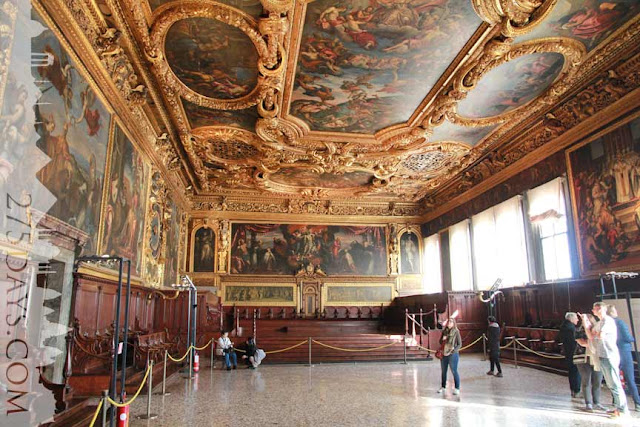 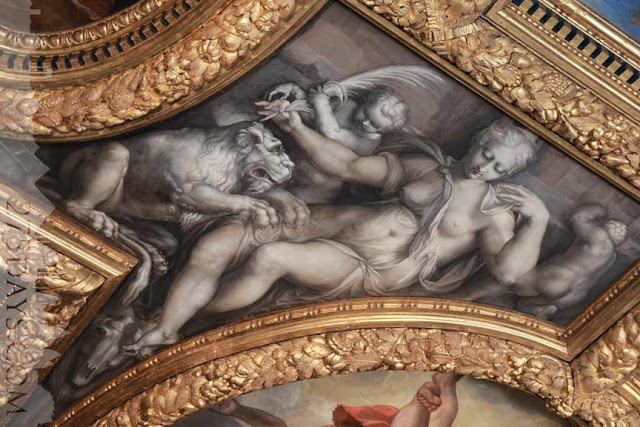 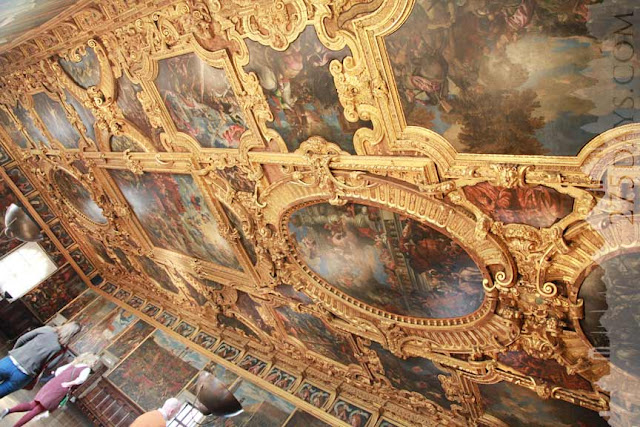 At the nearby Correr Museum, I was transfixed by the display on the history of book printing and Venice's place as a distribution point for those first printed books.
I read the train ticket incorrectly, leading us to miss our early Tuesday morning train to Padua, but fortunately there are many, and our ticket was valid for four hours. With a little bit of running, we managed to get to the church we planned to visit, the church that required a ticket purchased online ahead of time, the ticket that requires you to be there at a certain time and that time only. Otherwise you'll be turned away. Padua is a pretty university town full of students, but for us it was the calzone at what I think was Pizza del Cubo in Piazza dei Signori that we will remember. Well, that and the church was cool too. As was the anatomy hall. And the other church. 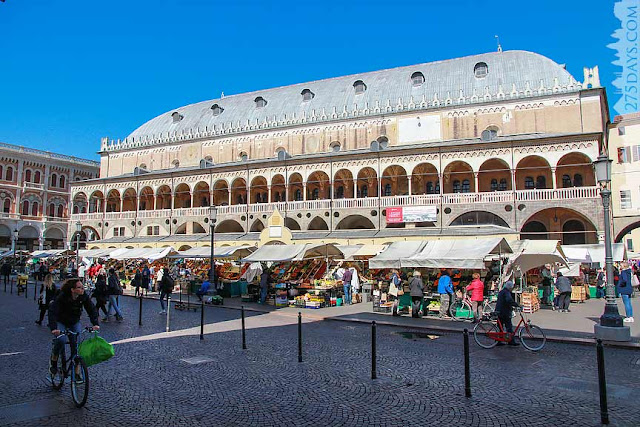 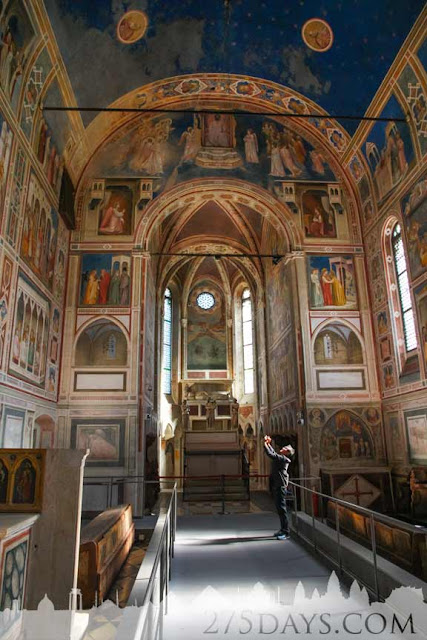 On our return in Venice, we walked through Cannaregio and took the long way home.
Wednesday we meandered through Dorsuduro, Santa Croce, and San Polo. One important note: if you are ever in Venice, you must stop in at the Church of San Pantalon. Look up, and your trip has paid for itself.
Thursday was the first of our two vaporetto days, as we sailed over to the Church of St. Giorgio Maggiore, climbing the tower (well, taking the elevator) for what can only be described as a splendid view of the city of Venice, followed by an extended walk through Castello, almost right to the eastern-most point. More church visits, and then we got turned away at the Arsenale. We thought it was a place to go in, but the security guard thought otherwise. 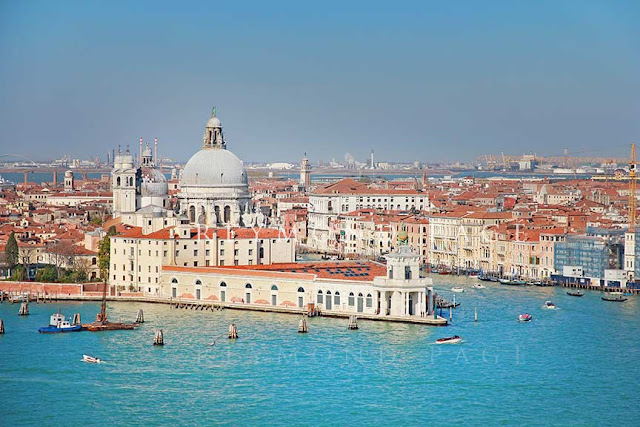 All the literature on Venice says that if you have a few days, you must must must go to Torcello, get away from the crowds and see the island where Venice truly began. A once heavily populated island, Torcello is mostly known today as the home of the Basilica di Santa Maria Assunta, a 7th century church with a few large mosaics. Well, it is nice, and we love seeing churches, but in my opinion, if you've never been to Venice before and are only here for a few days, I would say you could better spend your time exploring some of the many incredible churches in Venice (of which we went into more than twenty) without having to spend two hours on a vaporetto (one hour there, one hour back). Again, San Pantalon was far more awesome than Torcello. History buffs may scoff, but I'm into art and painting, and that ceiling is The Ceiling of All Ceilings. I didn't read anyone anywhere saying that you should see this church. But I am telling you, if you are in Venice only for the day, go to this church. Please google it. San Polo and Santa Croce were also probably our favourite areas of the city (although San Pantalon is actually in the very northern part of Dorsuduro, also quite charming), so it's worth heading over there.
On the way to Torcello, we stopped off at Burano, a lovely small island full of colour. It was a real delight walking around there in the early morning hours with only a handful of others to annoy us. 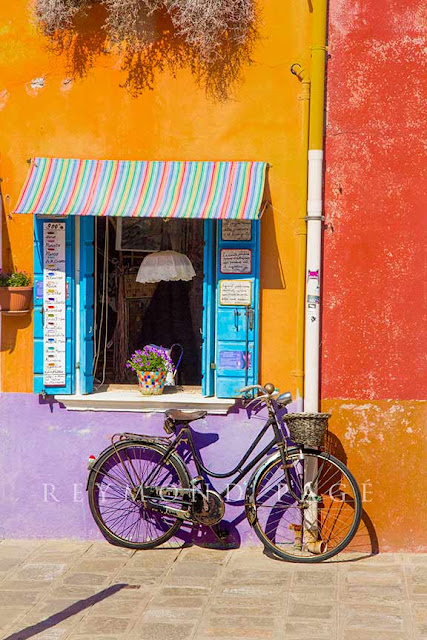 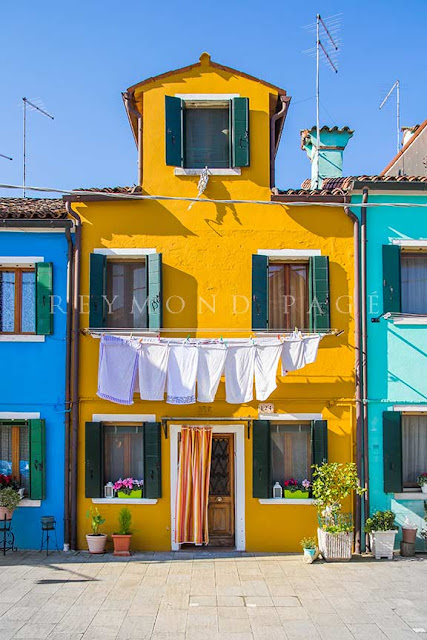 We stopped in again after Torcello, and I was taken aback at how different the place looked when it was covered with tourists - people in tragically unsuitable attire grabbing at knick knacks on shelves in the street in front of shops and generally making a nuisance of themselves. Ten minutes was all I could handle, then it was back on the vaporetto headed for Venice. It is a nice trip, of that there is no doubt (especially when the warm sun is shining down on you), being on the back of the boat in the open with a view across the lagoon.
I got up early on Saturday to photograph the city at its quietest, and then we set to work seeing the last of the stuff on our to-do list - Accademia Gallery, more churches, a bit more gelati, and Ca'Rezzonico - a palace included in our St. Mark's Museums pass.
First, I should say something about the Accademia, and that is: Don't go. Maybe it'll be a lot different when they are done their renovations, but man, half the place is closed off. Literally half. And then you have to ask, surely we're missing something? Seriously, I have to know that you walk past the sign for the bathrooms to find stairs to the lower floor? C'mon man. There is no way they should be charging full price for what they have on show right now. It really is a disappointment. Granted, they did tell us after we paid that they were doing renovations, but I think a better call would be to say, "Half of our museum is closed. Do you still want to pay twenty bucks to get in here...?" with a voice that trails off so that you know it's probably not worth it.
Second, I would like to say that you really should see Ca'Rezzonica. It's a remarkable place full of some really wonderful art, as well as windows with great views along the Grand Canal. 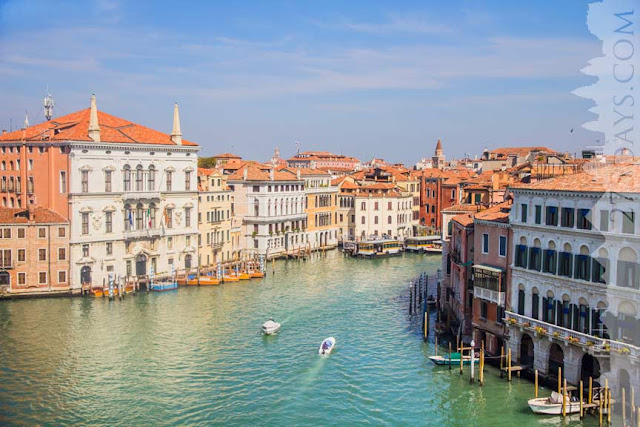 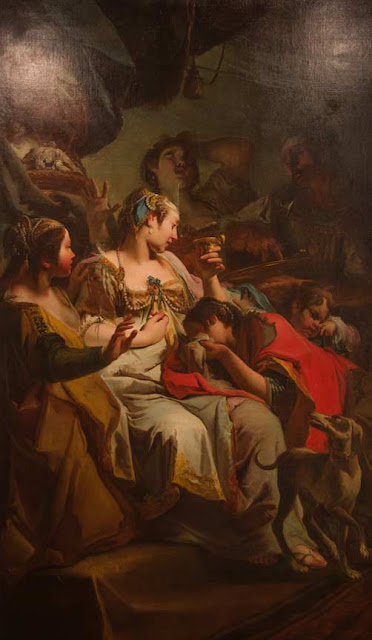 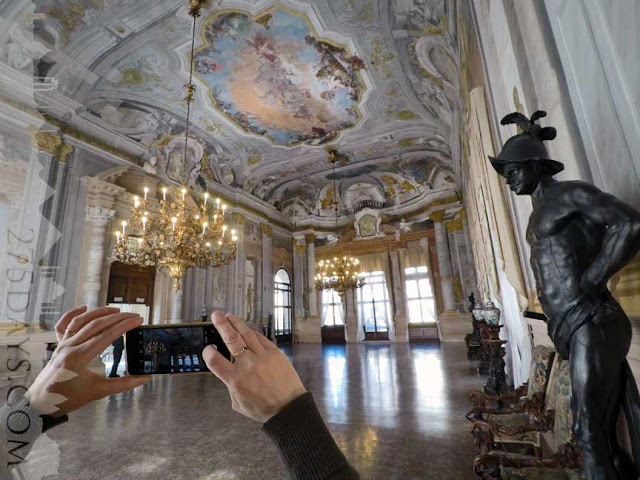 At some point over the last few days we stopped in at St. Mark's Basilica. We went in the late afternoon, only a few people in line. But...I'm not really fond of sites that have you walk single file through a fenced off area without really any opportunity to explore the place a little more fully. On the bright side, we paid the extra bucks (extra more than zero as it's free entry to the church itself) to get upstairs to see the museum. With that you have the chance to see the church from the second level, which is pretty cool, and can also head out on to the balcony for a great view over the square and piazza to the water. 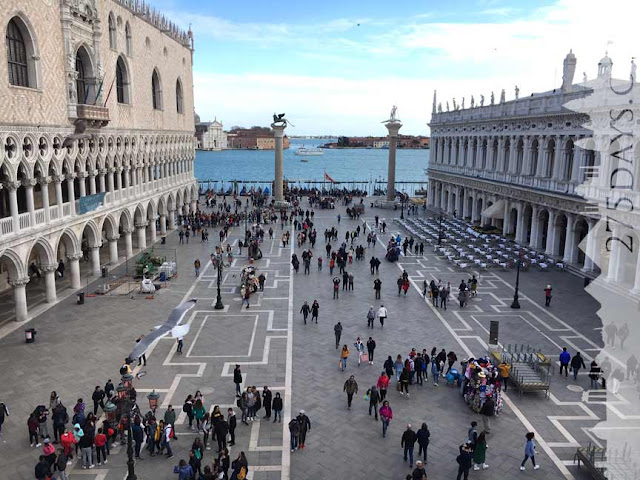 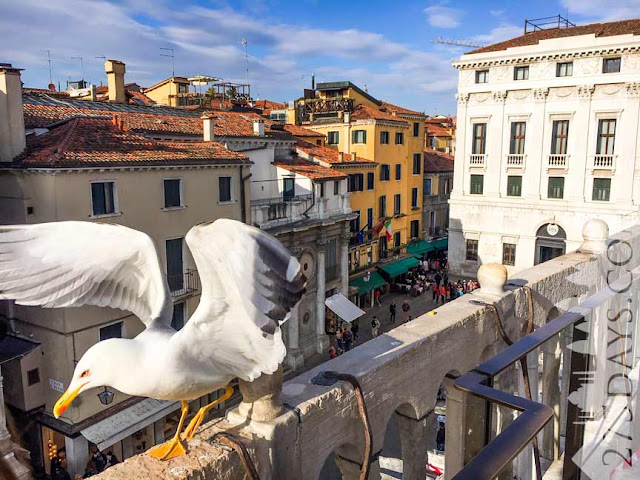 We awoke early again on Sunday for one last walk in pleasant and crowd-free Venice, and then wandered slowly through Santa Croce and over to the train station. Exactly seven days in Venice and short of an evening shower on Monday, it's been blue skies and warm weather the entire time.
What a beautiful city. 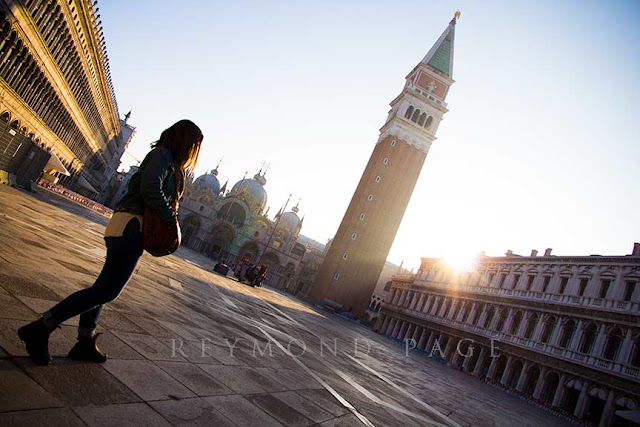 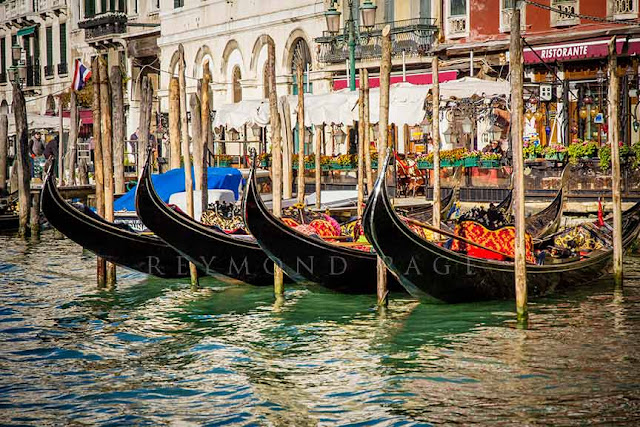 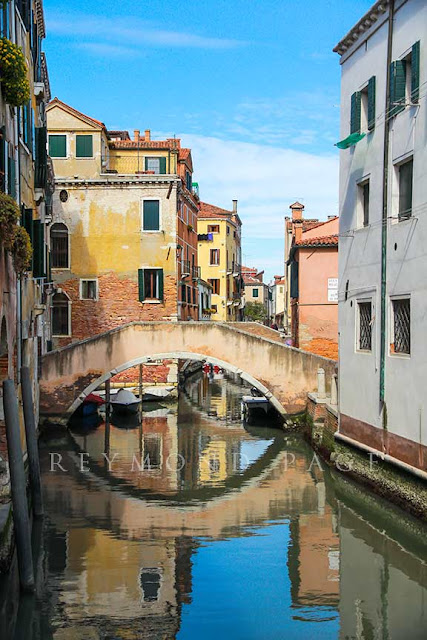 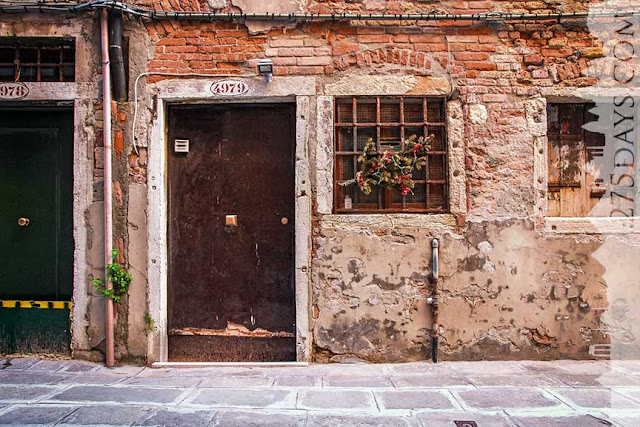 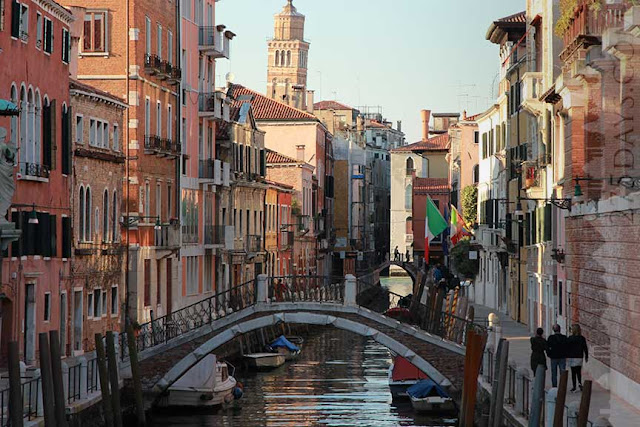