The Wonder of Travel 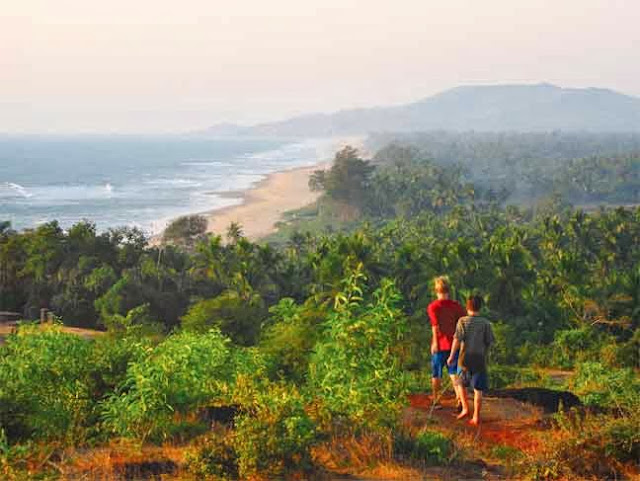 I don't know how much Gokarna, India has changed in the last twelve years, but back in 2008 it was wonderful, everything one could have asked for. From the landscape to the people to the beaches to the restaurants, it was all literally full of wonder.
We walked these headland paths between Kudle Beach and Gokarna Beach every day for two full weeks, twice a day - in the late morning sun after managing to extricate ourselves from the comfortable rooftop terrace and perfect breakfasts at Mahalakshmi Restaurant, and again hours later heading back home, as the sun began to sink into the far edge of the Arabian Sea. More often than not, we’d clean ourselves up in our room, then walk back to the centre of town for dinner at the Pai Restaurant. A truly enjoyable thing about staying in one place for an extended period of time is getting to know where you are, getting to know its people, and of course, becoming more and more acquainted with its food. Both the Pai and Mahalakshmi served exceptional dishes, and each day it seemed, we were greeted a little more warmly, a note of recognition in the eyes and smiles of the people there. Mahalakshmi’s owner was usually the one to greet us inside the front door, and I remember that first day how he guided us through his building, out the back door, and up a set of stairs to the rooftop. I was skeptical at first as to what we could possibly find out here after what we witnessed on the inside, but this view…and the food. After that day, he merely waved us on through, allowing us to find our own way up stairs, and he would follow along with the menu minutes later.
After about a week of walking the seaside path to Kudle Beach, we somehow discovered a tiny bakery hidden in the bushes, up the hill, out of sight. Cinnamon buns were added to the daily routine.
Part of the fun of travelling for long periods is meeting other travellers on more than one occasion. On an overnight trek to sleep under the stars in Jordan’s Wadi Rum, we met a British couple, Allan and Maggie. They had been to India numerous times, and as we talked of our future plans, they had some recommendations for us. “If you want to see Goa like it was twenty years ago, go to Gokarna. You won’t regret it.” A full month later, we bumped into Allan and Maggie four thousand kilometres away on Kudle Beach and spent a couple days hanging out together.
This photograph conjures all of that and more. The endless sunshine. The warm salty water. Beautiful coastline. Green as far as the eye could see. Gokarna itself, but also the possibilities that travel represents. The opening up to new experiences. Discovering these amazing places that we’d never heard about before. Seeing life played out in a way so different from our own back home.
I think we would say that Gokarna was one of our favourite places in all the world.
After our last breakfast at Mahalakshmi, we told the owner that we would be leaving early the next day. After a few words to us, he leaned forward and looked into our kids’ eyes. “We’ll see you again someday.”

What are some of your favourite places?