Chios is one of those places that you'd probably never think of when it comes to Greek Islands. And why would you? There's Santorini of course, which everyone has to go to because every book about Greek islands will probably begin with a chapter on Santorini.  Mykonos. Naxos. Paros. Crete. All beautiful islands to be sure.
One of the reasons we chose Chios was its proximity to Turkey. Another was its simplicity. And as budget backpackers, cost.
By the time we got to Chios we were in week nine of a forty week trip. We wanted a place to relax, restore, and hang out, without breaking the bank. And when we were done, it was a half hour ferry ride to Turkey. The house on Chios was one of the few things we booked before we left on our trip at the end of July. I'm not entirely sure why I was comfortable booking some other places in Italy and Greece while on the road, and not on a Greek Island. Probably because I knew we were going to be there for two weeks, so I'd better get it right.

At any rate, we showed up in mid-September, which turned out to be perfect timing. Apparently no Greeks or any travellers are interested in going to the beach and dipping their toes in water that for a prairie Canadian was practically at tropical temperature.
The first thing we noticed about Chios was that it looked like it never rained here. Later, we found out that that was almost true. It had been a year. The next thing we noticed was that once the sun came up, Chios looked a lot like other Greek islands: no clouds in searing blue skies, and a lot of water nearby.
So what does Chios have to offer?
Chios Town, where the ferries dock, has pretty much everything you need, from car rentals to big grocery stores, and a decent beach down at Karfas, but we didn't really do much in the way of exploring around town. Our home was on the opposite (west) side of island, about an hour's drive away. Up one side of the mountain and down the next (with lots of ups and downs in between).

The house was just a couple kilometres outside of Volissos, a pretty small town with maybe four hundred in habitants. In town you can get most things you need at a basic little market, and a nearby baker that is about as basic as it gets but makes the most mouthwateringly good bread. Over the course of our eighteen days here, we probably walked to town ten times just to get bread in the morning. And I didn't take even one photo, of the bread or the bakery. What a shame.
There is a demolished fort above the town that has some attractive views of the surrounding area. 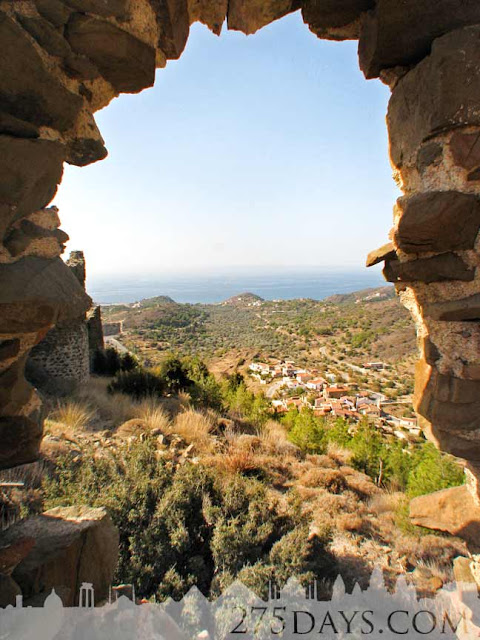 Chios is a big island with a some fascinating small towns, of which we visited Mesta, Pyrgi, and Olympi.


Mesta is an extraordinary place that would be worth a visit no matter what island it was on. Known for its labyrinthine alleys and numerous arches, it was a centre of mastic production, important in the early days of gum production. As in chewing gum. 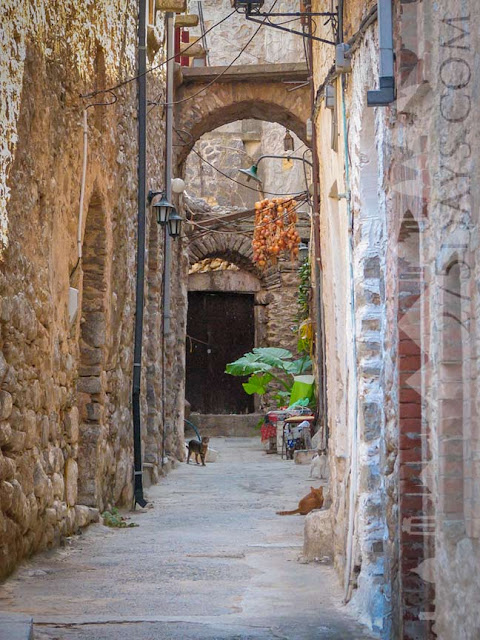 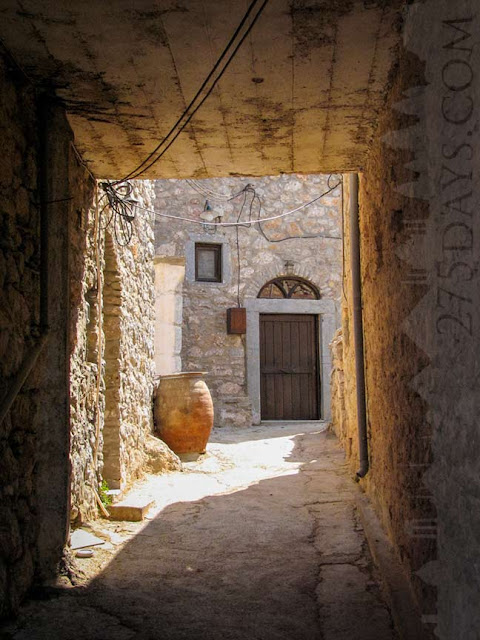 One place we didn't go to and I'm forever kicking myself over was Anavatos, a ghost town from medieval times. This isn't the best drone video ever, but it makes me think that if I am ever back on Chios, I will not miss this again. https://www.youtube.com/watch?v=VgitUCBWXc4
The main reason for coming to Chios was to relax, and we did plenty of that on Limnos Beach, just a couple hundred metres from our house. If we weren't eating, or walking to town for some more bread, we probably spent eighty percent of our free time on this beach or in this water. We saw one other family, only twice, on this beach the whole time we were on the island. It doesn't get much more relaxing than that.