Watch our video of Bologna here.

In 2007, we spent the month of July travelling around Italy, at the start of a nine-month trip around the world (that would include more of Europe, the Middle East, India, and Southeast Asia). On Day 12, we met a man at a roadside stop overlooking the extraordinary town of Pitigliano. "Bella," said the man. "Very bella," I whispered in return. He was a doctor from Bologna, visiting Tuscany on his holiday. He asked about our plans for Italy, and was visibly miffed that those plans did not include Bologna.

"Everyone goes to Rome, Florence, Venice…but they forget about my beautiful Bologna. Promise me you will go." We could not promise that as our plans did not have us venturing any further north than Florence, but he didn't seem any happier that we wouldn't be seeing Venice either. He had spent a great deal of time exploring his home country, but, "Bologna is my favourite." We went our separate ways, him back to his home, us around the world (but avoiding Bologna).

From that moment on, I had this little dream of Bologna in my head. It was twelve years before we would make our way back to Italy, and it would probably annoy our doctor friend that this time, we would spend a week in Venice but only three days in Bologna. Venice, Verona, San Marino, and Bologna. Finally we were here.

As I looked back on the pictures this past week, I realized that I still hadn't given Bologna the attention it deserves. One of the city's most striking features, is its forty kilometres of porticoes. Yes, forty kilometres, a full marathon's worth, of covered walkways. And not just something they threw up to keep the rain of our heads, but beautiful, arched walkways that are worth visiting the city for on their own. When the university opened in 1100 (yes, 1100), students flocked to the city. With a need for more living space, buildings were expanded on the street side, from the second floor up, creating both more rooms for students, and covered walkways at ground level. You can walk all over the city on a rainy day and only feel the rain when you have to cross a street. 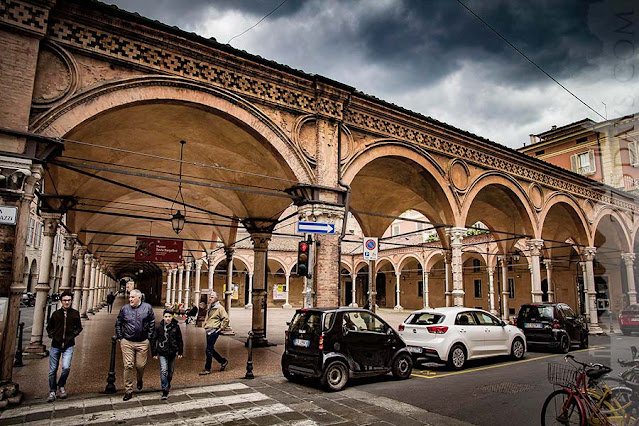 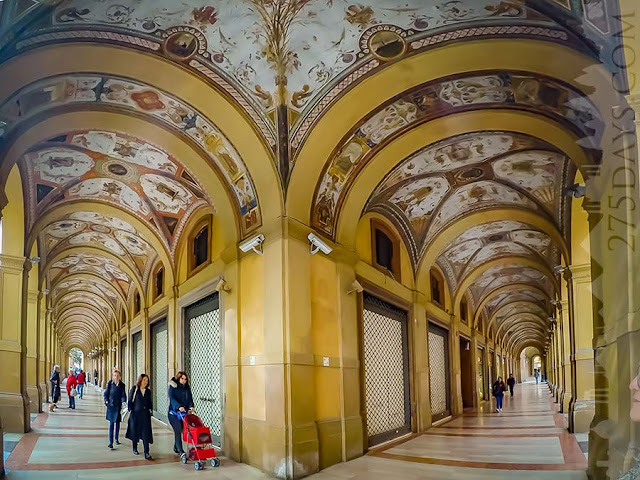 The most amazing continuous portico is along Via San Luca, a four kilometre covered path up to the Sanctuary of the Madonna of San Luca, where you will pass by 660-plus arches on your way up to the church. Despite the warm spring day (for a couple of prairie Canadians) several Italians passed us by wearing light parkas. Many people used it for light daily exercise or a strenuous and quick run.

Bologna is also home to a number of stunning churches, from the Basilica di San Petronio in Piazza Maggiore to the Seven Churches complex in Santo Stefano Square, along with many others: Basilica di San Domenico, Cattedrale Metropolitana di San Pietro, Basilica di San Giacomo Maggiore, and more.

Another highlight is the climb up the tallest of The Two Towers: the degli Asinelli (the shorter being the Garisenda). From the top of the Asinelli (be sure to book a time the day before at least) you'll have an absolutely extraordinary view over all of Bologna and the surrounding countryside. If you're just a little bit competitive (like me), you will stand in line first (or second, behind a family with young kids...rats). It's an arduous climb, so if you race to the top as fast as you can, you might have as much as ten minutes to yourself up there before the rest of the pack arrives.

A little bit more of Bologna.


As evidenced from the picture above, Bologna is very walkable. It was a fifteen minute walk from the train station to the hotel. The walk up to San Luca was around an hour and a half, but could be done in under an hour.

We also did a food tour with Delicious Bologna. It's both a great way to see and learn about the city, while getting filled up on the region's food specialties. Get in touch with Mattia, he's a great guy.

Email ThisBlogThis!Share to TwitterShare to FacebookShare to Pinterest
Labels: Bologna, cities, italy, travel, what to do