I'm on a few mailing lists from travel related companies. It's great for staying in the loop, but bad for wasting time dreaming about where you could be, maybe even where you should be, instead of doing the things that need doing right now. Anyway, every now and then I get an email that makes me think someone is a bit out to lunch, and today is one of those days.

The email came courtesy of Condé Nast Traveler ("Truth in Travel" being their little byline or subheading or whatever you want to call it), and today they are talking about Budget Travel so of course I clicked on it right away (the main image being from Angkor helped a bit).

Things go awry right off the bat. Their main thesis is that if you travel during the off-peak times, you can save a bundle. So for instance, in example one, if you want to go to Granada, Nicaragua, in the summer time during the green season (i.e. "rainy") you can expect the posted rates to be up to 20% lower. Well, not a great deal, but somewhat of a deal I guess. Then I read their quoted prices. Cost in peak season, $480 per night. Uh oh. Cost in Summer, $380 per night. I kept looking for a decimal that didn't exist.

So I scrolled down to Siem Reap, Cambodia, and see that one can save 50% by going in the summer time. Sure, it'll be hot, but if you don't mind hot, who cares? Instead of spending $445 per night, you're only spending $220 per night. Okay, now since I know a thing or two about Siem Reap, I feel the need to speak up. I suspect there are more than a few people who might think $220 a day is a tad more than budget, considering that "Budget Travel" usually means travel costs falling in the low end of the price spectrum.
They quote double rooms at the Victoria Angkor "from" $145, day long tours from $50, etc etc. so I also suspect they are talking prices for two people? Maybe.

I thought I'd give you a bit of the 275 Days Budget Travel Experience, in combination with Favourite Place, Part III.
We arrived in Siem Reap, Cambodia (via the infamous Scam Bus, but that's a story for another day) on March 5 and left on the March 12 (just a week outside peak season, so maybe we were already getting the "summer rates"). Our first night was spent in a double room at the Jasmine Lodge, a nice place but on a the very busy main road, a good walk from the markets and the river. On the morning of day two, we sought out some place a little closer to the action, and found the Family Guest House. I notice that prices have doubled since we were there, so we'll go with the new prices, $16 per night for four people. They've got a great rooftop patio where you can eat and surf, and watch the goings on down below. 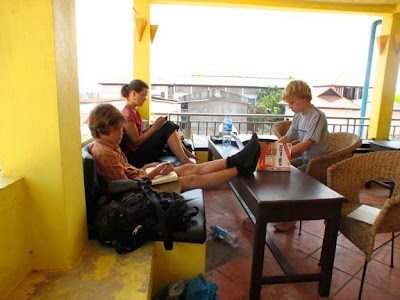 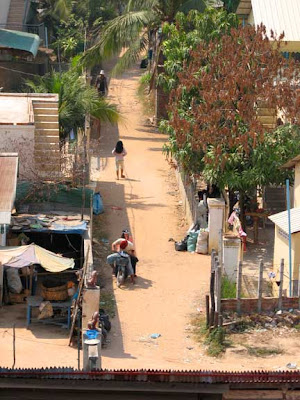 looking out the back 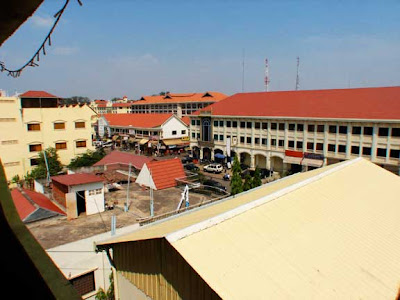 Looking out the front

Getting in to see the Angkor temples still costs the same, $60 per person....for a whole week. If you're under 12, it won't cost you a penny. If you're only going to be there for the day (you came all the way to Angkor and you're going to leave tomorrow??) it'll cost you $20 a person.

Now, eating. If you're in town, you can go to a real variety of places, but remember, we're talking budget here. There are plenty of options. Maybe a nice place with balcony tables on the second floor, clean, with great food. 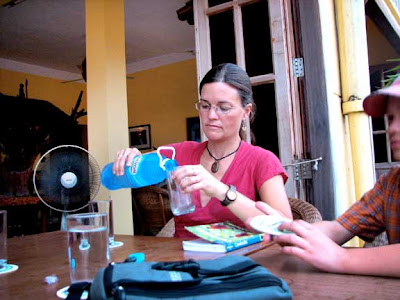 That might set you back $3 to $5 dollars a person. Cheap, but not budget in Southeast Asia. We then tried the place a couple doors down from the hotel. You'll sit in plastic chairs at a reasonably clean table, enjoy the company of mostly Cambodian folks, and you'll spend a dollar a plate. That was in our budget. 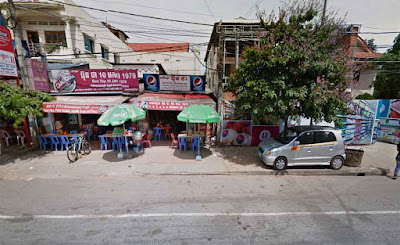 If you are going to eat lunch among the temples, and why not, it's easy and it's good, you're back up to $3 to $4 a plate and drinks are a buck. If you're a good customer, you might get a discount. 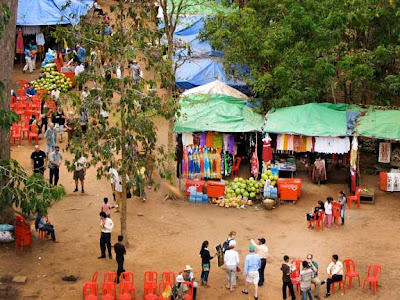 These are not the restaurants, but they look more or less like this.

To get around Angkor really requires some wheels, and here we skipped the truly budget option of renting bikes, as we were into our eighth month of travel, and were looking for something cool, like the trailer attached to Mike's motor bike. 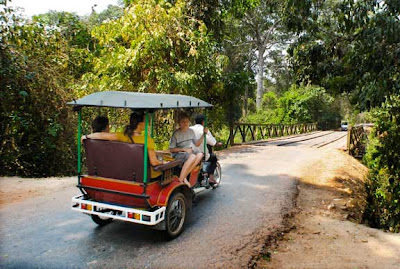 It's super fun and has the added bonus of being refreshingly cool. Mike took us all around for $12 per day, basically waiting on us as we visited temple after temple. Services (for example) today are not much more expensive, depending on how far you want to go.

For four people.
What do you get for all this? 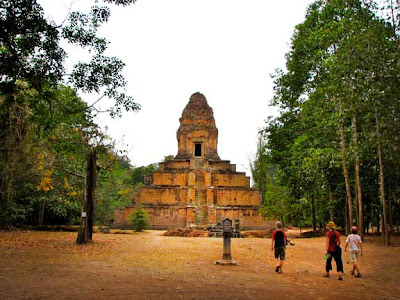 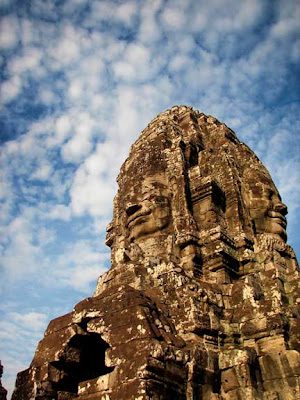 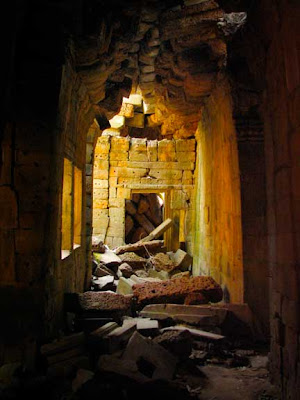 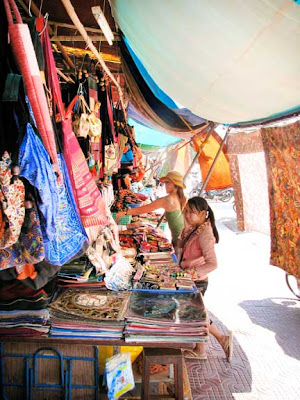 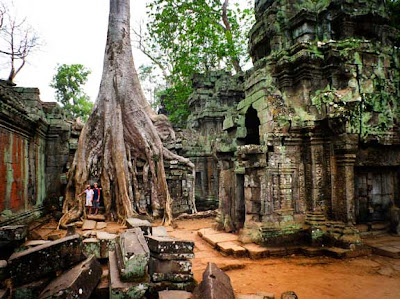 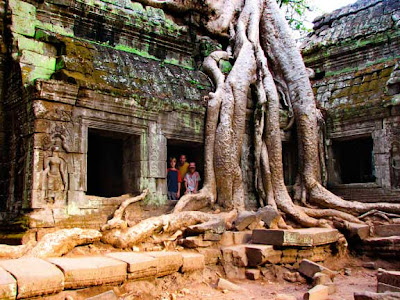 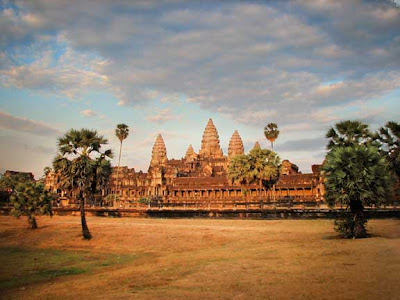 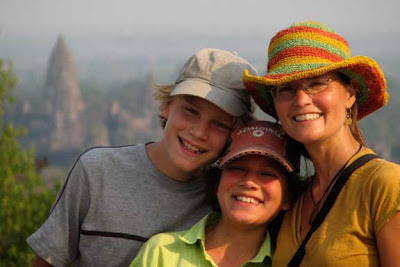 Having a full week to explore at our own pace, we often just sat in a quiet corner while a tour group raced through and got their photo here and there before racing on to the next attraction, then we continued on in peace and quiet, often by ourselves. One day it felt too hot to be out in the ruins, so we wandered around town, bought some souvenirs and gifts, and had some ice cream at the Blue Pumpkin, in the old market area, also mentioned in the Condé Nast article. Matthew's caramel cone kind of tasted like burned coffee, but his replacement strawberry was quite nice.

Angkor may have been the most remarkable thing we saw in the whole two hundred and seventy five days. The jury is still out on that, but we sure had fun, even as a true budget traveler.