Istanbul was for us a city that conjured up all sorts of ideas and imaginings. It was our home for two weeks and became a place where we felt very at home and at peace. Riding the subway, taking the bus, walking the streets all became normal over those fourteen days. Normal, but never dull, as I'm sure any city of fifteen million is anything but dull. But what most captivated us was the skyline, the unending minarets that dotted the horizon as far as the eye could see. 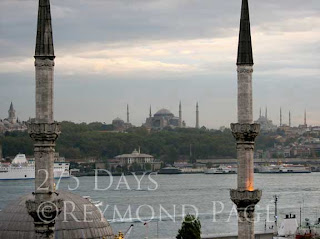 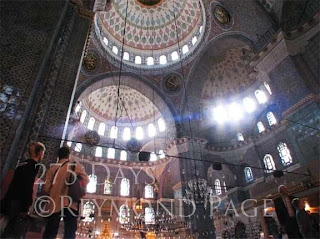 We never got tired of going into mosques, just standing and staring upward at the beautiful domes, the tiled columns, light dripping from windows overhead. If we'd had more time, we would have seen every mosque in the city. But there is too much to see, even in two weeks. Besides, we also had to shop for groceries, fun, get our Syrian visa, mysterious yet successful, get out to the Apple store at the Kanyon Mall to find out what was wrong with my iPod, among other things. 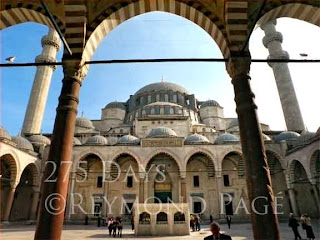 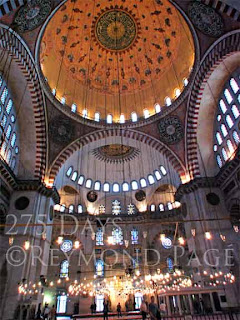 So many people work so hard to eke out a living in Istanbul. Numerous shoe shine guys eager to accidentally drop a brush in front of an unwary tourist, gentlemen in their 50's and 60's selling purses or belts or wallets, all carefully laid out on a blanket. Or the restauranteurs. Wow, the restauranteurs who beckon to every passerby, especially those who look vaguely foreign, inviting them in to try the fish. Come see the fish, come smell the fish, look, hold the fish! Crossing the lower level of the Galata Bridge is like, well, I don't know what to compare it too. But you should try it. Once will do.

Istanbul was a city that welcomed us from the first smile of the cleaning woman who let us into our flat (we'll forget about the jerk who conned us into an unnecessary taxi ride from...wait, we were forgetting about that, weren't we?) to the last, from the man who sold us our train tickets that would take us on to Syria.