How to Smuggle Your Knife into the Vatican Museums

We managed to get ourselves lost while walking down to the central train station, but the good thing about getting lost in Rome is that it's just so darn fun. There's something interesting to see literally everywhere - down the street, across the street, in the trees.... 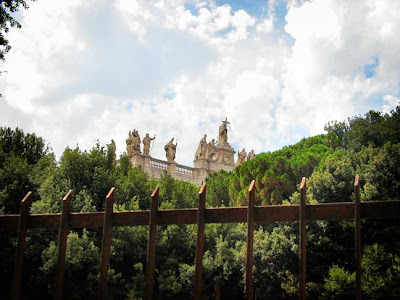 At the station we bought some metro tickets and asked the very patient woman at the desk where we might find a bus map. "Out in the centre," was her reply. We walked around outside for fifteen minutes looking for the ATAC (Rome's public transport company) sign but what seemed so endearing yesterday, the dearth of public signage, was now a curse. We went back inside where I finally broke down and asked a guy at a newspaper stand. Parla Inglese? "A bit," he mumbled. Where would I find the ATAC office, I'm looking for a bus map. "Outside and to the left," he said confidently. Off we went, spirits rising, outside the building into the bright Roman sunshine, and turned left to exactly nothing. Maybe he meant the other left. Is there a law against signs in Rome? The other left was as forthcoming as the previous one and we were back inside through another exit. Laura asked someone behind a desk and she was told that any newspaper or magazine seller would have a map. Hmmmm. Just outside the door of the nearest magazine shop, I found exactly what we were looking for on the left side of the rack. I handed my euros to a familiar-looking retailer who eyed me kind of strangely.
Successful and soon to be informed, we opened our remarkably comprehensive and intimidating bus guide, eventually finding the stop that we needed to get where we hoped to go.
As we walked toward the bus stop, a slim man with stylish shoes and a large toothpick in his mouth jumped up and asked if we needed help. Suspicious, I passed right by him saying that we just wanted to catch a bus. To the Vatican, Laura finished. "Right there! Go! GO!" he shouted, spitting out his toothpick. We leaped aboard and stamped our tickets in a little machine (Matthew is free!). No one checked that we stamped them, but the fine for not doing so is between one hundred and five hundred euros. We will continue to stamp them as required. 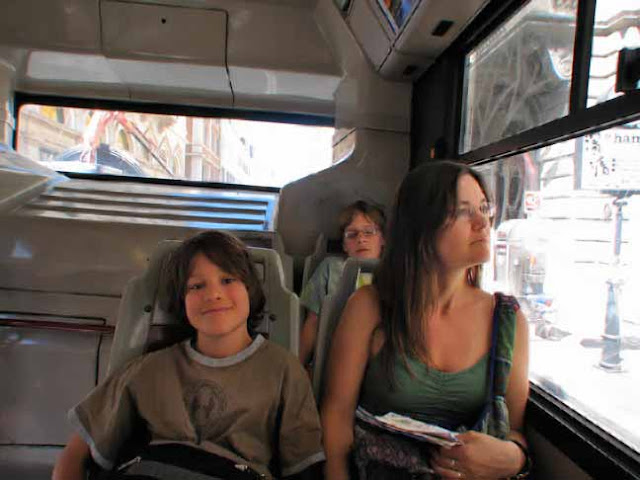 We were moving towards our destination without the need to engage our legs, and that was a great joy after much walking the previous days. We passed by countless sights (and lots of palm trees) 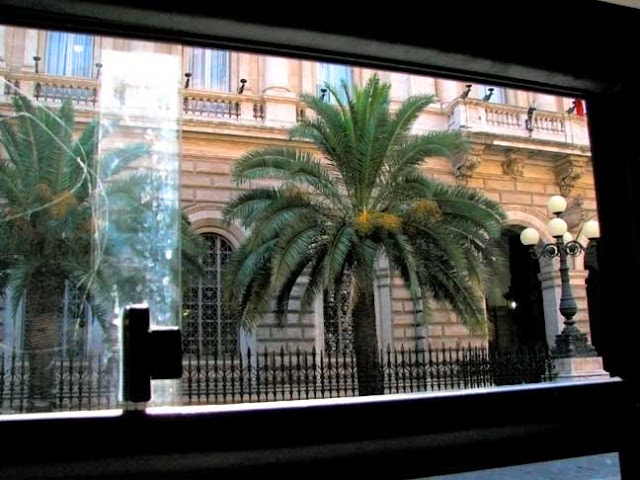 got off a couple minutes from St. Peter's Square, and had our lunch in a shady spot. Anywhere there is shade and marble feels significantly cooler than out in the sun.
So, off to the Vatican Museums. As we entered the doors, we saw the bag screener things like they have at airports. Suddenly Laura realized that she had a very sharp knife with her, one that'll cut the tomatoes so thing your in-laws will never come back (thanks, Krista!*), so she did the logical thing and tried to stuff it in my bag! If anything, I thought, put it in one of the kid's bags, for crying out loud. We decided to come clean and told the security guy hanging out by the door that we had a knife that we used for our lunch, you know, to cut cheese and such. "What kind of knife is it?" he asked. You know, a cheese cutting type knife. "Let me have a look," he said. Laura pulled it out, and he gave an audible, inhaling whistle. "Better check that," he said curtly, and pointed to the bag check desk.
Bag-check guy was uninterested in us, even as I walked toward him with a knife in my hand. "Security first," he said, with a wave of his hand. The knife disappeared into one of the bags, before we tossed them on the conveyer, sending them through, along with a little prayer. The guy with the little X-ray TV thing asked Laura to explain what the long sharp looking item was in her bag. We were busted. She started pulling things out of the bag in question, but that is not the bag I put the knife in. I suggest that maybe it was the stiff backing of the backpack, but security guy number two waved me off with an abrupt hand gesture, sort of a 'back off' gesture. A couple of other guys came over and looked at the X-ray image and after careful deliberation surmised that it was probably the hair brush. Yeah, that's it, the hair brush, I said, with a nervous laugh as I grabbed our other bag - you know, the one with the KNIFE in it - and did an innocent-as-possible jog over to Bag Check. I wanted this knife out of our hands, pronto. After a few minutes, the clerk finally looked up and said, "You can't check that here, this machine is broken," telling us to go to the one upstairs. I was tempted to say, But we have a knife!! but held my tongue. Upstairs, we paid our way in, forty two euros total (no freebies here), and over to the next baggage check. We walked up, relieved to be rid of the albatross, and the guy waved us on! "It's okay," he said with a warm smile, and looking at our bag, "you can take that in." Jonas and Matthew raced ahead without a moment's hesitation.
Stunned, we walked into the Vatican Museums with our very sharp knife.

*The knife was a gift from our friend Krista from her very recent trip to Germany.
Learn more about our travels here, and find our travel books here, here, and here.