Another question we're often asked is where are you planning on going to next?
I think we'd definitely go back to just about anywhere in India, but I got a book on the Andalucia region of Spain and found some pretty fascinating places that would be worth a good long stay. And if you're going to stay anywhere for more than just a few days, think about renting an apartment.
And if we were going to rent an apartment somewhere in Andalucia, it might well be this one. 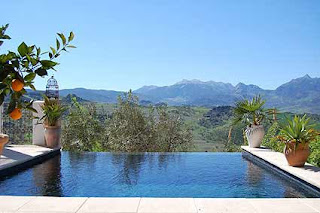 Okay, it's kind of pricey, but you have your own kitchen so you'll save money on meals, and it looks so nice, you might also save money by never leaving (except to get groceries).
That's pretty unlikely as you're just a couple hours from Alhambra, the place to see if you are in southern Spain.
Well, and then there's Seville.
And Cadiz.
And you're just up the hill from Ronda.
And I'm sure there are more than a few beaches not too far away.
Yeah.....