This is a post written after a day at Fatehpur Sikri in India, just outside of Agra. This was one of many bus trips around India, a road trip made all the more wonderful due to its newness, the location, and the fact that I was doing this with my family. Was it exciting? Well, it certainly had its moments. 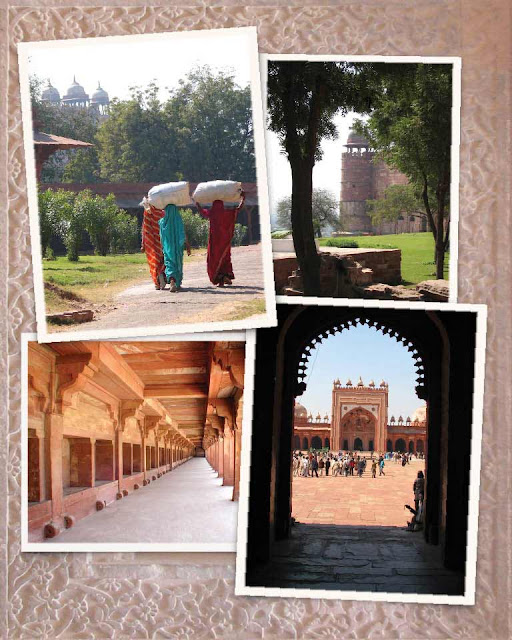 The rickshaw driver who takes us to the bus station cannot understand why we’d take a bus to Fatehpur Sikri when he could take us there and back for only seven hundred rupees. Well, for one thing, the bus there and back will be two hundred rupees. We’re getting the sense that there is an impression that money is no object for Westerners. There are times when a private vehicle is warranted, welcome or maybe even necessary. But the local bus provides an experience that is somehow more real, more right, and more informative. The bus ride is a bumpy, dusty affair, the bus itself scarred on the outside (and in some places on the inside) by the unwashed remains of previous passengers’ colourfully recorded memories of this trip. Less than half way there, the woman in front of Laura and Matthew appears to be looking at the somewhat mangled bare foot of the young man a few rows ahead. After a few lurches, she asks her neighbour for the window seat. She rolls down the window and hangs her head out. I give Laura the back pack in case she needs to deflect anything.
We manage to arrive incident-free, and right off the bus are asked by a few people if we would like a guide, very cheap price. No thanks. “But how can you see the beauty of this place without a guide?” This is the third time that line has been used on us in the last twenty-four hours. Not to take anything away from what a guide can offer, we’ve found that it’s often more fun to let the kids spend time in some of the out of the way spaces, and allow them to experience things at their own pace, not feeling like we’re on the guide’s schedule. Some of the guides that we have overheard didn’t have much useful information. “Lookit the statues here. The carving is very intricate. It is an elephant. Now lookit here...” dragging their clients from one point of interest to another. From what I’ve seen, I’m half-convinced that some guides are making up their commentary on the spot.
A hopeful restaurant owner points out a shortcut to the main gate, which involves a short climb up a garbage-covered hill, complete with, much to Jonas and Matthew’s delight, a warthog rooting around in the garbage. At the top of the hill we are greeted by a naked boy and his only slightly more clothed older brother.
Fatehpur Sikri is a city that was built by the Mughal emperor Akbar several hundred years ago, but was abandoned not long after. As such, it is in immaculate condition. Immediately inside the massive, one hundred and sixty-five foot high front gate, a young man presents himself and tries to begin our tour, like he works there. “A student,” he says.  We say we’re not interested in a guide. “No guide, I just tell you and show you, come over here.” Look, not interested. He keeps on and on and on, following us for several minutes, until I finally just turn and move into his space for a change. Listen, we are not interested in you following us around. You’re pissing me off. Go away. “Okay, but promise you won’t let any other student guide you around?” Get lost, I say, leaning in a little closer, cage door opening wider. [This was a consistent refrain for our time in India - someone attaching themselves to us and refusing to leave after being asked several times. It got on my nerves, and it wasn't until after we left India that I realized that while that type of person was being unreasonable, I wasn't doing anyone any favours by letting my emotions get the better of me.]
Akbar originally called his walled city Fatehpur, or Town of Victory, after yes of course, a particular military victory of which he was quite proud. Fatehpur Sikri today is a wondrous place (even without the guide), an architectural inspiration, well maintained, with lots of green space. It’s a fascinating place for all of us to wander around, with all kinds of delicate, lacy, carved stone screens in marble and sandstone. There are a number Indian tourists visiting today and many say hello and introduce themselves, get their photo taken with us, and smile broadly. Despite the jokers, India continues to impress us.
The helpful restauranteur is happy to see us, and he takes us up the gritty staircase to the rooftop dining area where we enjoy a relaxing meal, our cheeks brushed by a gentle and sunny dust-kissed breeze. With the bus stand right below us, we can spot our bus and head down in time to get a ticket and get on board.
If you visit Agra, Fatehpur Sikri cannot be missed. And I highly recommend the local bus.