A revised post written on the island of Chios, Greece, reflecting on the previous few weeks, with particular emphasis on the idea of driving in Greece. 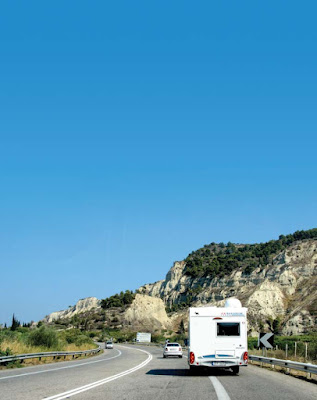 Random Thoughts
One night in Athens, on the way to a sweets shop just down our street, an orthodox priest dressed entirely in black was hollering in our direction. I had no idea who he was talking to, but as he kept his eye on me, it was clear by his tone and his hand gestures he was not impressed by my shorts. Given what other people were wearing (or perhaps showing might be the better word) on the street that night, I couldn’t figure out his problem. I’ve lost probably fifteen pounds so far, so most of the time my shorts are hanging below my kneecaps. Laura was thinking that maybe because of my long hair and beard, he figured I was a little more Orthodox myself, and he’d just caught me on a night out.
I wonder what he would have said had he seen us racing around the Peloponnese with the windows down, listening to Van Halen. Which brings me to my next point. There’s something invigorating about driving around the Greek countryside while listening to fun music. When we arrived in Astros, I made a couple of CDs because I knew we’d be doing a fair bit of driving over the next two weeks. Well, it was a blast, cruising down the highway with Van Halen cranked. I’m not a huge Van Halen fan, but the beginning of Unchained, coupled with the clean air, blue skies, and endless hills, brought the moment home for me in a way that Gordon Lightfoot could not. Judging by the percussion sounds coming from the back seat, I’d say Matthew enjoyed it as well.
In Italy, we found ourselves at a loss to describe the feeling of actually being there. Then to be driving the highways, through the little towns, around, over, and through the mountains, eventually we would just look at each other, and smile and giggle. We’re driving in Italy!
Ferry to Greece, get in a car and go, and the feeling remained. Add some Van Halen to the mix, and look out. Anyway, my point is, it’s just plain fun.
‘We’re driving in Greece’ was code for, ‘Whoo-hoo!!’