We were going to Damascus. It sounded very cool, just the name of it.
Damascus.
After one last breakfast at the Riad Hotel, we packed our things, said some goodbyes (to proprietors and fellow travellers), and slowly made our way out the front door. It always seemed as though there were more taxis on the street than people, and today was no exception. I approached the closest one and said, "Bus station." The driver pulled over, named a price that was agreeable, then got out and loaded our bags for us. Unlike in Aleppo, the bus station in Hama is almost deserted. A young, well dressed man approached us and said, "Damascus?"
"Yes," I replied warily. Why do my spider senses only tingle when we're not being scammed? "How much and when does it leave?"
"Ninety pounds each and four minutes."
We were on the road in ten minutes. Seven dollars for four people to travel two hundred and thirty kilometres.
We were let out in the middle of the gravel parking lot at Harasta bus station on the north side of Damascus. Our bus must have been one of the few today as we were immediately surrounded by a gaggle of taxi drivers.
"Where are you going?"
"Sultan Hotel."
"Ah, Sultan," said twenty guys in unison. At least they knew what I was talking about.
"Five hundred pounds," said one guy, hopeful that we were poorly versed in both mathematics and geography. Another guy, my height and several pounds heavier, grabbed as many of our bags as he could get his hands on, and said, "Come with me, sir," dismissing all the other drivers. When I asked him how much, he said no problem and just walked faster. Had I been thinking, I would have noticed that my spider senses were on lunch break, the clear signal that there was something sinister afoot. But at the end of a long bus ride, with that typical stale taste in my mouth and an itch to get to our hotel as expediently as possible, I let my guard down.
As he put the first bag in the trunk, I said again, "How much?"
"Four hundred."
"I was thinking maybe two fifty." Had I read the guide book more carefully, I might have been thinking one hundred or one fifty. But I did not read that section of the guidebook.
"Three hundred, sir," he said, very politely.
Somehow we eventually settled on two fifty, and off we went. We arrived at the Sultan without further incident or conversation, two hundred and fifty pounds in my hand securing our satisfaction. At the front desk, I explained that we had emailed, and yes, they had a room that was actually for five, but they were prepared to give it to us for a special rate. Thirty four hundred Syrian pounds. Yowzers, that's sixty eight bucks. Rhymes with sucks. We checked out the suite, two rooms and a bathroom, but it was just an average, not entirely unattractive looking hotel room. It's not bad, but it's not a $68 per night room. We paid twenty bucks at the Riad, so we told them it was just too much for us. Their response suggested that there would be plenty of bodies to fill that room later today, and as such they wished us well on our way out.
We walked to the backpacker area, about a kilometre away, and found the Al Rabie Hotel. We looked at two rooms and chose the larger one that had four beds and a couch, and our own bathroom,* for sixteen hundred pounds. The rooms were a bit unkempt, and the place was clearly past its prime. It had been a family home at one time, very fancy, with a large courtyard, and many pretty rooms with marble floors and fifteen foot ceilings. Laura described it as a crumbling palace. More like a crumbled palace, but it had a certain charm that we could easily appreciate. 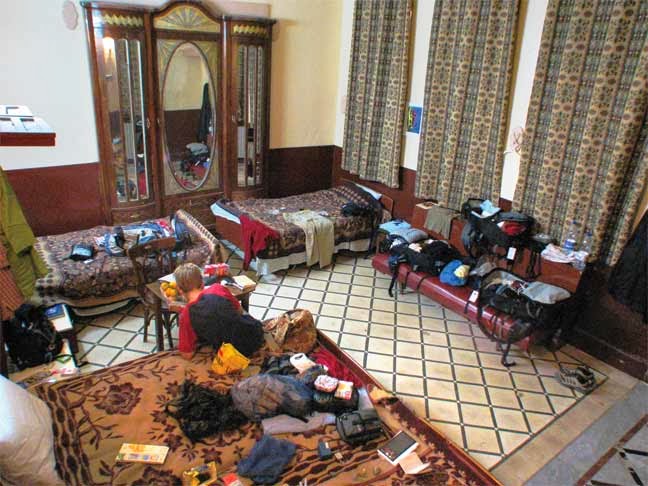 *The bathroom on the other hand, was completely charmless. It was about three by five feet (perfect for one of our new Turkish carpets), and the shower head, as in Aleppo, came directly out of the ceiling. Almost directly over the toilet, again. It was more like a shower stall that happened to have a sink and a toilet in it. We were sort of used to the shower head out of the ceiling/bathroom as a shower stall thing, but this place was taking it to a whole other level. The sink had a tap on it that looked like something you might find in the boiler room of a submarine. The kicker was that when you turned it on, more water ended up on the floor beneath the sink than in the actual sink itself. Maybe it's the foot shower, Jonas said. And the sink was so tiny that when I brushed my teeth I had to press my face to the mirror and turn sideways to spit. Mind you, if I accidentally spit on the floor, I just had to turn on the tap. Funniest of all was that I hit my head on the shower head the first time in there, then stepped in the puddle under the sink that the previous person (Laura!) left behind. I think this is one of those times where words alone could not allow you to completely appreciate such a marvel. And yes, it was as bad as it looks. 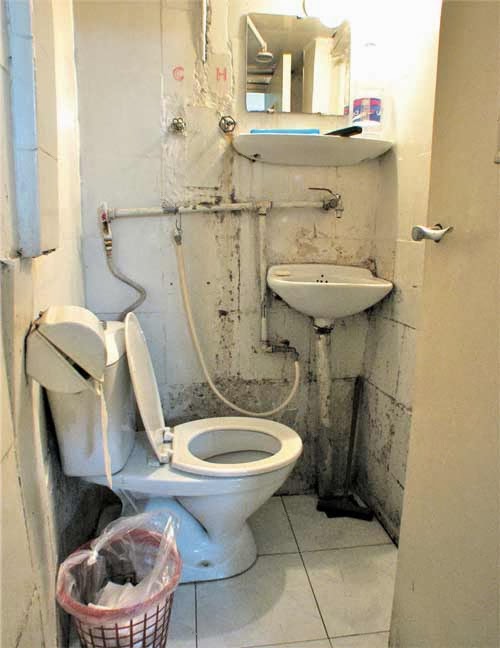 No, it was worse.
Despite my misgivings about the bathroom, we got settled quickly, dried our feet, and went out to find a restaurant for supper. We ended up at the Al Kamal Restaurant, and a fancier place I have never frequented in my life. With great respect, we were escorted to the second floor and seated next to a large window, giving us a fine view out on to the busy street. The aroma on both floors was tantalizing, making our mouths water. There were guys in gold suit jackets everywhere, some waiting on diners and others who appeared to be just waiting for someone to whom they could attend. We asked our gold suited waiter what it was that we could smell. He thoughtfully looked up and to one side before replying, "Perhaps the lentil soup?" We ordered the lentil soup.
Waiting for our order, we spent the time watching the action outside the window - cars, busses, taxis, and pedestrians all jockeying for position on the road. Our efficient waiter came with our soup, and neatly placed everything in front of us - the soup, some little pita chips, and cut up lemons in separate bowls. As he straightened up, I gave him the, "What now?" sort of look. Now, it was subtle, but I clearly heard the air as he exhaled through his nose, the way a zealot might do to a heathen who was unsure of how the ceremony should proceed. He grabbed my chips and crushed them in his hands (not a metaphor) and sprinkled them over the soup, then squeezed a piece of lemon over it all, then worked his arms and hands into a position that looked like an Olympic gymnast completing his floor routine.
"Enjoy," he said, and off he went. The soup was even better than his performance. Then borouk, sort of a cheese filled pastry thing, and then roast beef. I hadn't had red meat like that since we left home. Fabulous. After dinner, we rested up at the palace for a bit, then went out to an internet café to finalize some accommodations in Jordan for the following week. 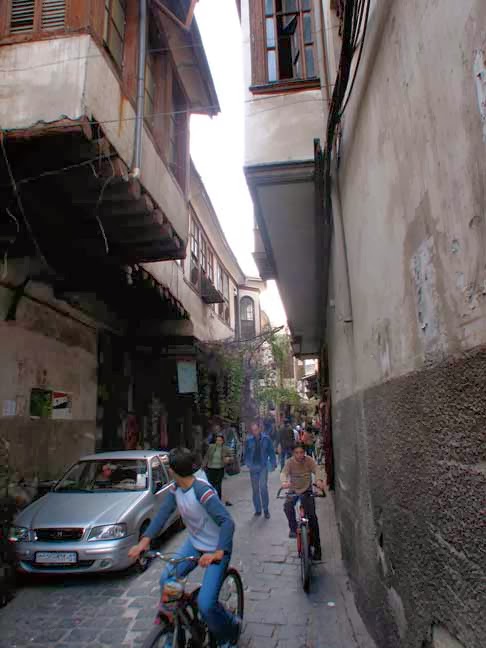 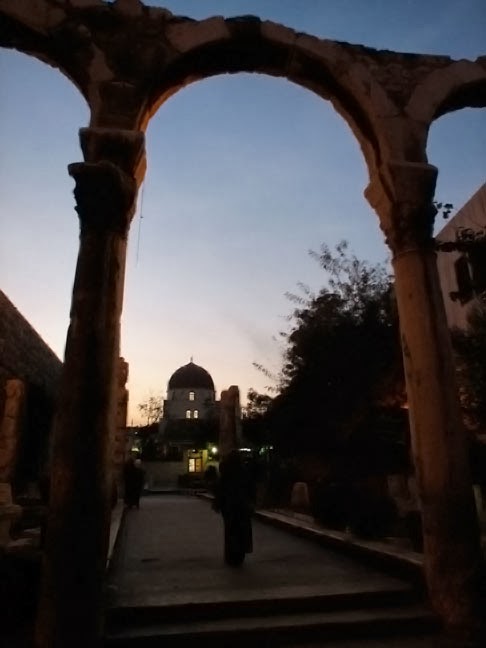 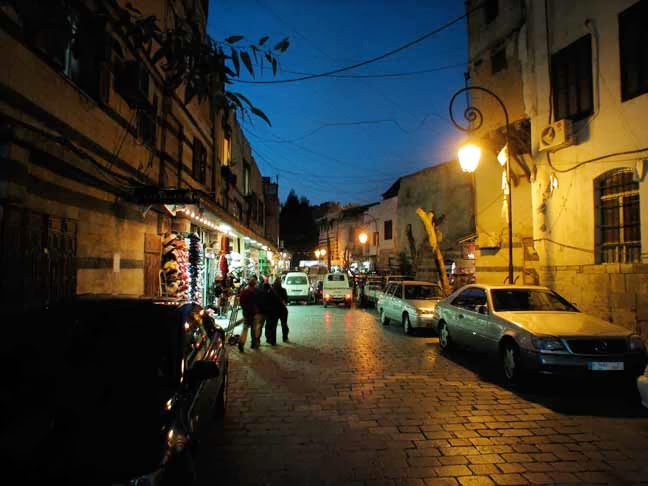 Matthew and Laura went for a snack while Jonas and I were on a couple computers (that boy would give up a limb for computer time), then later on the way home, Matthew needed to stop at a small shop for a chocolate bar. There were loads of these kinds of places, smaller than a mall kiosk, burrowed in at the street level of aging buildings, all selling sweet and salty snacks, sometimes bananas. Matthew selected a bar that looked like a Syrian version of Twix, and asked the guy behind the small counter how much.
"Ten pounds (twenty cents)," said the young man.
Without taking his eyes of the man, Matthew took another bar in a manner that suggested he was afraid of getting caught, then handed the man twenty pounds. The young man gave Matthew a big smile. "How do you like Syria?" he asked us. Wonderful, we replied together.
The boys ran, back and forth, while Laura and I walked slowly, hand in hand, down the tiny lanes back to the hotel. 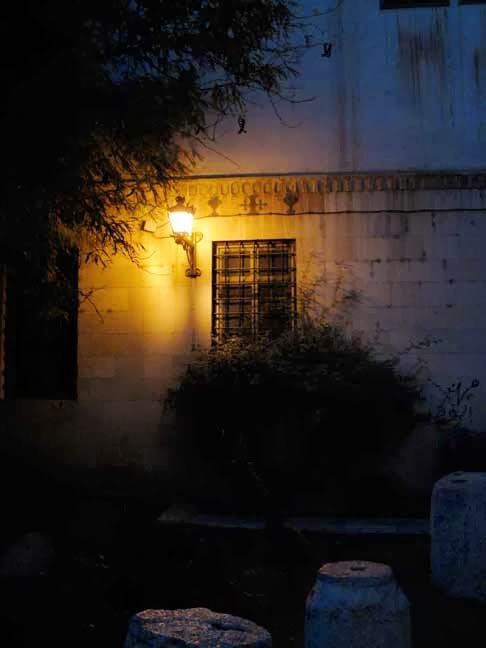 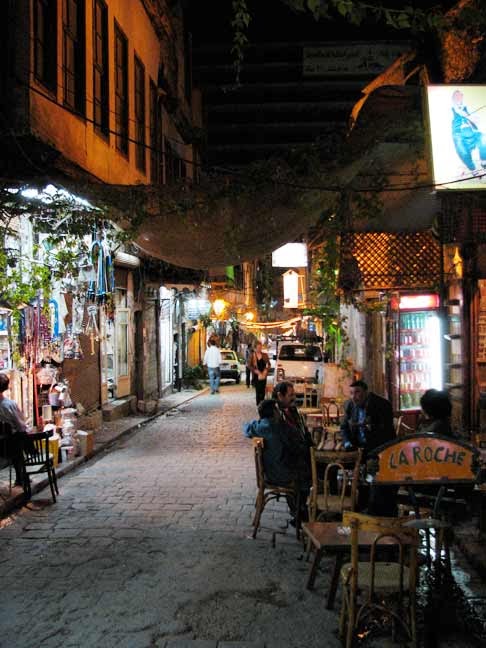 We did some journalling, admired our bathroom one last time, and went to bed.