Throughout a nine-month long journey around the world, you are bound to have some downtime. How do you best help your children manage that time in a way that helps them to be engaged with wherever you happen to be?
Here are a few tips that helped keep a lid on mutinous thoughts over the course of those 275 days.

Although we had a laptop with us, it was not intended to be the go-to device for keeping the kids out of our hair while we figured out how to get to wherever we were going next. Just like at home, we would have the odd movie night, and part of the joy of finding one dollar DVD's in Damascus is in wondering just what exactly it is you will be watching that night. Didn't plan on watching The Incredibles in Spanish? We'll get over it. We're in Damascus. Let's make masks instead. 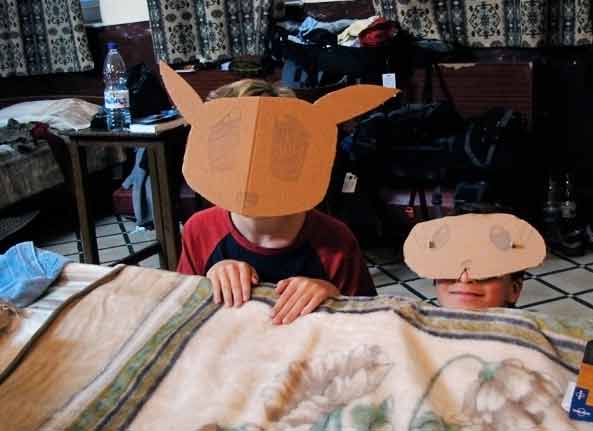 One of the stipulations we had in planning our trip was that we wanted to see things that were decidedly not North American, so while we did go to Italy, Greece, and Turkey, we were also in Syria, Jordan, Egypt, India, and Southeast Asia (I'm sure there's a lot of argument about where the line between 'very much like North America' and 'very little like North America' could be drawn; we could easily and rightfully say that Italy has very little in common with our home town - but let's just go with ease of existence and leave it at that for now). Our thinking in going to some of these countries was that we were not there to entertain ourselves so much as we were there to learn, and to see and experience.
As such, on those long train rides in India, if we weren't sleeping or talking about what we had done that day, we would spend a lot of time with our own thoughts, looking out through the barred windows, and seeing India for what it was. From the slums on the outskirts of Delhi, to the beautiful countryside between cities, we saw a lot of India in seventy-six days. We saw a lot because we weren't texting, or playing games on our phones (uh, actually, we didn't have a phone of any kind with us...it was 2008). It seemed to me to be counter-productive to be in India, and playing a two dollar game on a small screen. We could do that anywhere. 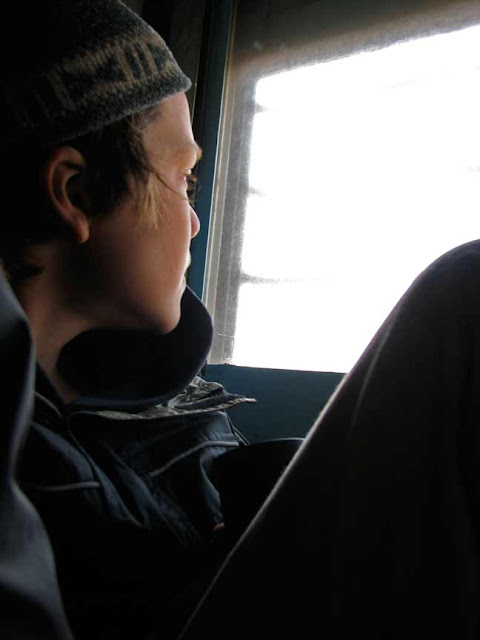 All that being said, there is only so much thoughtful gazing one can do on a twenty hour train ride from Jaipur to Amritsar. So...
Bring books. Yes, books are heavy, but a couple well-loved books will go a long way to making that all-day bus ride or overnight train ride a little more palatable for everyone. 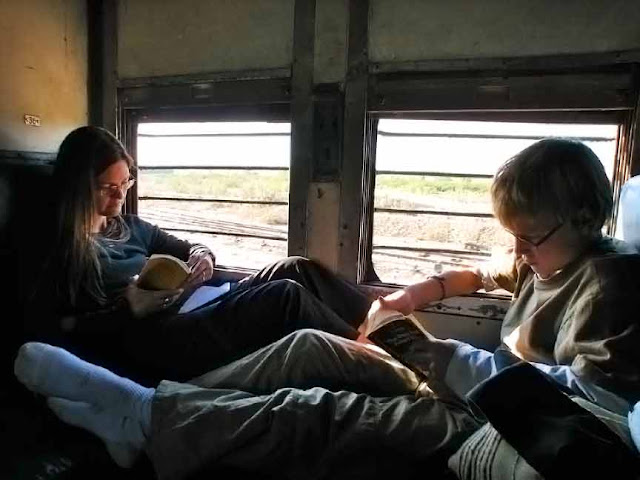 Who knew it would take twelve hours to do the three hundred kilometres between Gokarna and Hospet, India? Many budget hotels have a leave one/take one policy, so if you're done with something, you can leave it and grab another book that catches your eye. As well, in India and parts of Southeast Asia, books are far cheaper than what you might be used to if you're coming from Canada or the US, so it's a little easier to justify buying a book or two. Of course, this may lead to your wife buying several travel books and stuffing them in your bag while you're not looking.

A drawing pad and a pencil. Again, more stacks of paper, but good not only for sketching and idle doodling, you can play all sorts of games together after breakfast and before you go for a dip in the Arabian Sea. 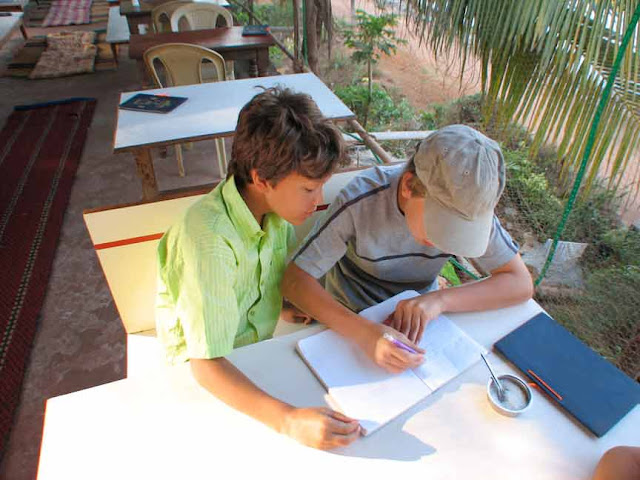 Travelling by bus in Turkey comes with a lot of perks, like bus stewards serving you cups of Turka Cola and little cakes on plastic plates. If you've thought ahead a little and saved business cards from every carpet shop your parents took you to (or were tricked into entering), a styrofoam cup and a a little clear plastic can be engineered into a pretty cool flying contraption. Giving them the chance to learn to entertain themselves is invaluable. 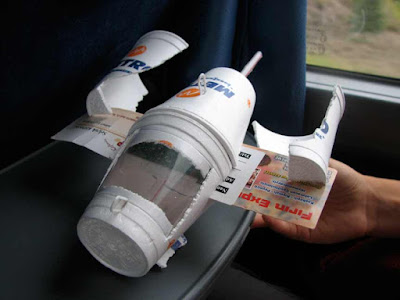 One thing I wish we would have done a lot more of, was let the kids lead the way. Let your children have the guidebook and make the decisions about how the day will go, and have him explain the Battle of Thermopylae to their younger brother. 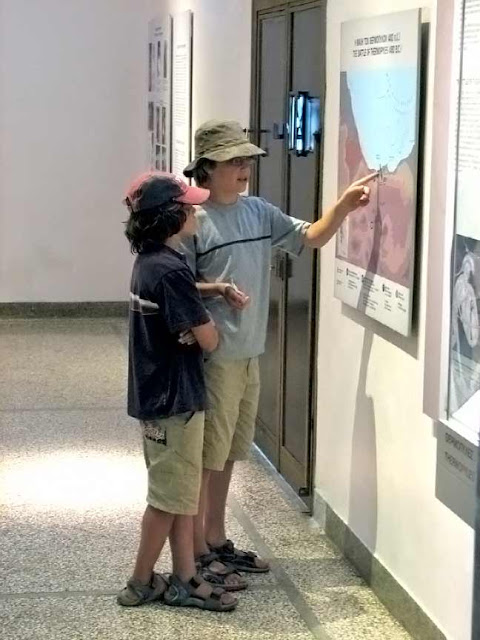 Just a few seconds after I took this picture, one of the museum guards was walking up behind them, I think with the intention of telling him to keep their hands off the exhibits. When he recognized that they were talking about the battle and not goofing around, he let them be. He kept an eye on them, but he allowed them to learn and discover at their own pace, in their own way.
That's part of the beauty of long term travel, having the time to spend a little more time than might otherwise be necessary. If they've got a notebook and your kids want to sit and sketch hieroglyphs for half an hour, so be it. 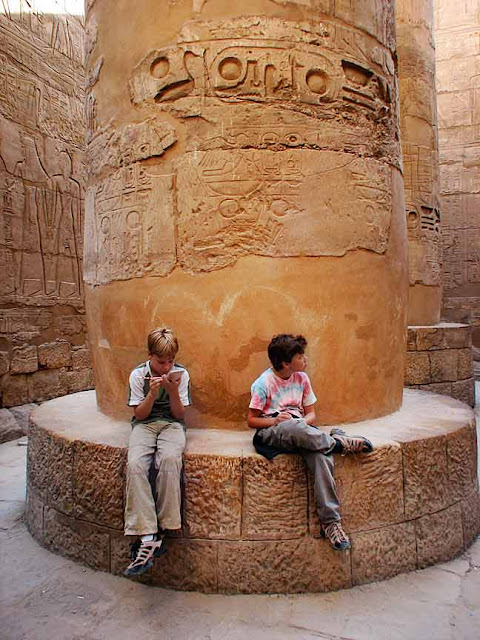 Including your children in your future plans is another way to ensure smooth transitions from one city to another. Hanging out in Jerash for four hours was not quite long enough for our oldest, who let us know it. However, knowing we were going to be at Petra in a few days made it easier to let it go. Being part of the plans gives them some ownership, and the ability and opportunity to anticipate is a big part of travel just as much for children as it is for adults. It's a lot easier to tolerate the scam bus from Thailand to Siem Reap if you know that Angkor is at the other end of that miserable (but now laughable) mini-journey. 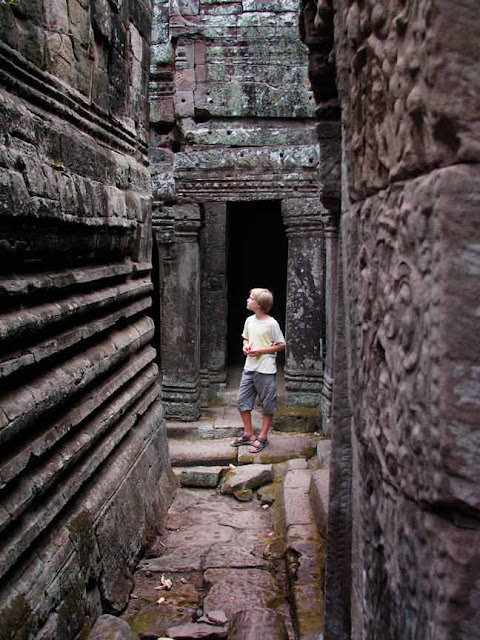 And although there are certainly many more things that one can do, this is my last bit of advice, courtesy of Max Johnson who helped us in our planning. For any extended bit of travel, take time out for the odd holiday. We put in place several stops along the way that included relaxing beaches. If nothing else, if no one is having any fun, there was always a new beach just around the corner (although we did have one two-and-half month stretch with no beaches...) to recharge, and read those books that your wife hid in your backpack.

Learn more about our travels here, and find our books, here, here, and here.