The Most Magnificent Things

We happened upon Chittorgarh quite by accident. A train reservation clerk who was maybe new to his job? A computer glitch? Or was it just plain old fate?
Whatever it was that conspired to get us to Chittorgarh bright and early that January morning, to you I say, Thank you.

Here's our story of Chittorgarh. Be patient, there are many pictures to come.


Given our past experiences in getting on trains, Matthew is understandably nervous, but more contented as we arrive at Bandra Terminus over an hour early. Still, he is Mr. Chit Chat until the train arrives, with wide eyes darting back and forth across the platform, scanning the horizon for any sign. He is visibly relieved when the train pulls up well ahead of departure time. He is visibly annoyed when they tell us we must wait for them to finish cleaning the train before we can get on. We sit with our bags, taking turns checking out the many food stalls up and down the length of the platform. Men come by and stick large sheets of paper on the outside walls of the train car, beside each door. It’s a computer printout listing all the passengers by name for each particular car along with the seat number assigned to them. We are thrilled to see our names listed on the side of a train car in India, like we are now written into history. We are in a class 3A car, meaning three levels of bunks, six people in each berth, air conditioned. These were the only seats available when we reserved them in Aurangabad.
As soon as the car is ready for us, we jump on and get to our seats and make ourselves comfortable. We chain our backpacks together underneath one of the seats, keeping out anything we may need for our overnight journey. It’s not long before the train pulls away. As we will be arriving in Udaipur very early in the morning, I ask the man who comes by checking our tickets what time he expects we will be there. He give me a solemn look and says, No Udaipur. This, Ajmer.
Now, I’m not a complete idiot. I can see that the ticket reads Ajmer so a little explanation is in order. 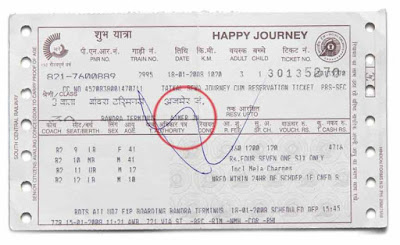 Some seat tickets are held back until all other remaining seats are filled, then made available at a much higher cost (I assume they are most often bought by tourists or businessmen who don’t mind paying a premium for making last minute decisions). Also of note, you must buy these particular tickets for the entire distance that train runs, no matter where you choose to get off along the way. When we bought the tickets and it said Ajmer as our destination, the ticket seller explained the nature of the ticket, and told us that we would be able to get off at Udaipur.
I continue with my story.
Yes, I understand that this train goes to Ajmer, I say, but when will we pass through Udaipur? This earns me an even more grave look from ticket man, No Udaipur. Ajmer. He handed back our tickets and moved on to the next compartment. Silence. For the sake of our younger readers, I will just let you imagine the contents of the thought bubble above my head.
The Indian businessman sitting with us says, Not to worry, this train stops in Chittorgarh and from there it is only two or three hours by bus to Udaipur. We get out our travel guide and look up Chittorgarh, and the first line reads: Chittorgarh contains the greatest fort in Rajasthan and is well worth reshuffling an itinerary for. That sounds promising. Our itinerary is already shuffled, so Chittorgarh it is.
We arrive very early in the morning, before sunrise. The alarm watch wakes me, I wake Laura, we wake the boys. We all wipe the sleep out of our eyes, and use the bathroom before the train stops in the station. Standing in the aisle with our packs on our backs waiting for the train to come to a complete stop, it looks like we are ready to jump out of a plane.
We make a soft landing on the Chittorgarh platform and into the waiting arms of a friendly rickshaw driver. We exchange pleasantries as he does his best to sell us on his abilities as a driver and a guide. As dawn begins to break, he walks us over to the station desk where we stow our bags for the morning, then walk out into town.
After a quick breakfast we jump into the rickshaw which sputters away, back and forth we go up the hill through seven large gated archways. Speeding along in the open-air rickshaw, the crisp morning air stings our faces just a little bit, just enough to let us know that there is something ahead, something out there worth the chill.
Our driver, whose name I cannot remember, stops at a small temple, and we begin to explore this unknown place. 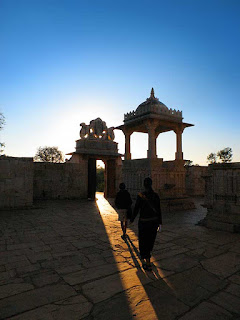 With our feet on the ground, the sun now feels warm, and anything in it's view radiates a welcoming embrace for the road-weary traveller. Meera Temple is small, but decorated with delicate carvings over much of its surface. 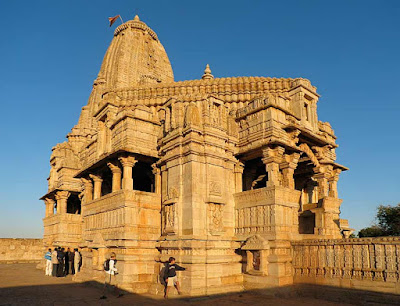 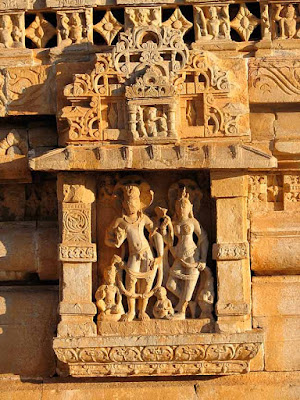 Nearby Vijay Stambha is our next stop, and is more than worth the price of admission (which, incidentally, was free) on its own. Built in the mid-1400's, it stands 120 feet high, and the upper floor, nine stories up, is accessible only by a tiny, tiny staircase, as space is at a bit of a premium. Navigating my 6'2" frame up, and later down, that stairwell was no easy feat, and even months later I was having dreams of getting myself stuck in a similar, but more sinister, set of stairs.
The inside of this tower has carvings all over, along with a bit of rather elementary graffiti, from the bottom all the way to the top, from where we can see all across this impressive place, perhaps the largest fort in all of India. 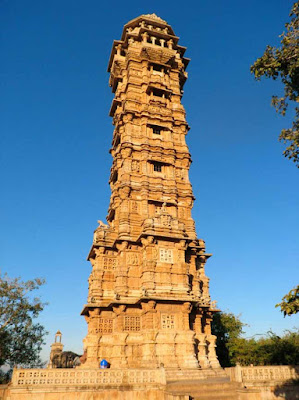 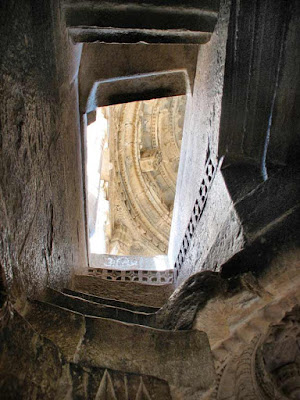 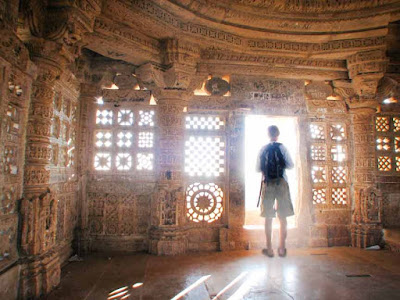 Our driver takes us around from place to place in his rickshaw, telling us as much as he knows about the fort’s fascinating history, and apologizes for his English, explaining that he normally acts as a Hindi guide. Chittorgarh Fort is an imposing place with walls thirteen kilometres in circumference, complete and intact, sitting at the top of a six hundred foot hill on the east side of the town of Chittorgarh. Our guide takes us out an enormous door on the east side of the fort where we have spectacular views over the countryside, and of the massive fort walls. 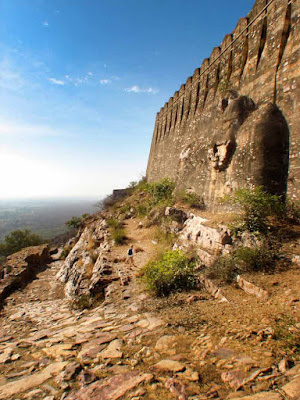 Inside the fort are numerous temples, palaces, and of course, monkeys. There is even a school in the fort as there are around four thousand people living in the town within the walls.


Nearby, a man makes a whistling sound and a number of monkeys gather. They follow him in silence as he casually tosses bits of food to them all. 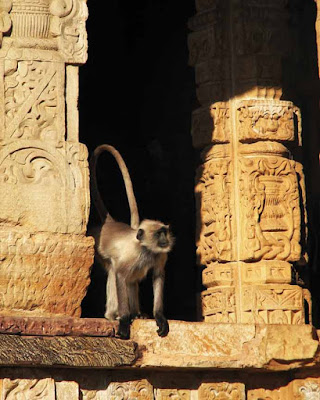 It’s a magnificent morning and we feel quite fortunate to have stumbled across this place that we hadn’t even heard about until  fifteen hours ago. Being so early in the morning, there are very few people here, probably because they got on the ‘right’ train out of Mumbai. A real pity, because this place is brilliant. 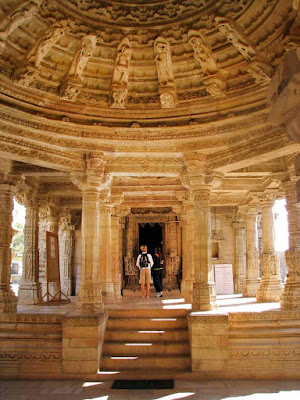 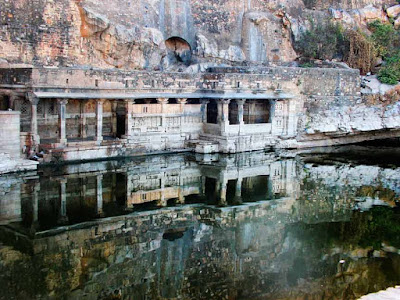 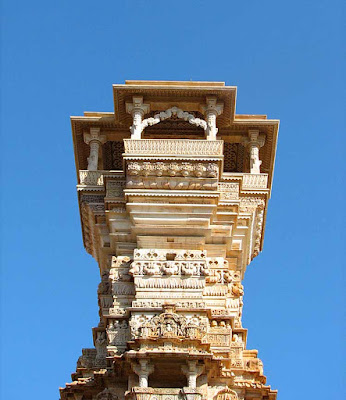 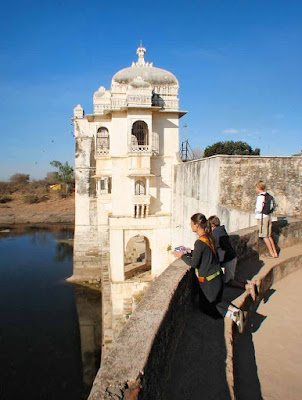 The kids have a wonderful time exploring everything, and now have memories of this incredible place because somehow (and I'm not blaming anyone here!), we got on the wrong train leaving Mumbai the previous afternoon. 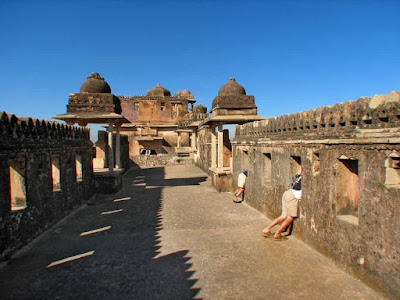 After three hours of uninterrupted bliss, we make our way back down the hill, back through those seven large gateways who along with our guide, are among the only witnesses to our morning visit to the fort. 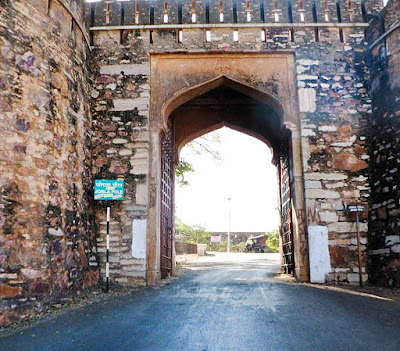 No stinging faces now as the sun is high in the sky, the air getting thicker by the minute, but in that lovely India way that makes you feel like you're being held by the country itself.

Here's my painting titled The Wrong Train, a door from one of the temples inside the fort. 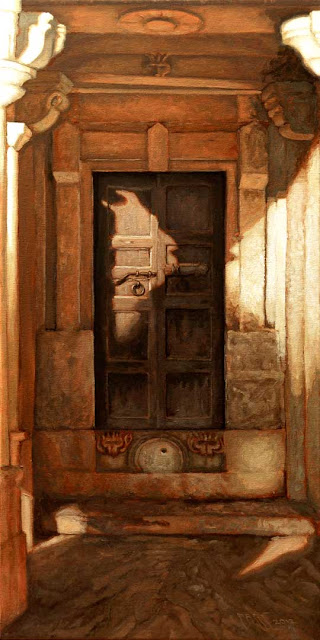 Magnificent it is. That painting is so real. Now you've left me nostalgic about my home country.

Thanks. I am nostalgic about so much of India.
Not the haggling, couldn't quite get comfortable with that even after 76 days. But most other things, yes, nostalgic is a good word.