Soundgarden first came to my attention at the beginning of my last year of fine arts, back in 1989. It was probably September or so, when I made one of my regular pilgrimages to Musiplex in downtown Winnipeg. I don't recall if they had those groovy, new-fangled listening centres set up yet, but one look at the cover of Loud Love, just sort of a mass of swinging hair, and I figured this was something that I could get into.
Back to my apartment I went, to my stereo, my over-ear Radio Shack headphones, and I sat and listened.
"Money can't give what the truth takes away."
"Trees fall down like dying soldiers."
Hands All Over is still one of my favourite songs.
His voice was just something else, you know, unrestrained power with absolute control, and he was just a kid! Not even two years older than I was.
When Badmotorfinger came along, Room A Thousand Years Wide and Jesus Christ Pose took my breath away. The song-writing was on a whole other level from what I'd normally listen to, but there seemed to be a deeper connection to things that were actually worth thinking about. Although this wasn't so much on my mind back then, ideas like these were among the things that I grew into caring about.
When Superunknown came along, things were changing rapidly for me. I was married, and my wife and I were expecting our first child. I sang Black Hole Sun and Like Suicide until I was hoarse, and then Jonas was born. A lot less loud music and singing.
1996 brought Down on the Upside into the world, and I snapped it up like a metalhead dad looking for something that reminded him of something he wasn't really looking for anyway, but was eager for it nonetheless. And I brought it home and thought, ugh. I might have listened to it a couple times, and then it made its way to the bottom of the cd rack.
1997 gave us another child, more responsibility, and even less time for basketball, painting, and loud singing. But as kids do, they grew up, and as they did, this new life found time for some of the things from the old life, and with effort and practice, it started to happen more and more often. (Of course, a whole lot more happened in the intervening years - we travelled the world with our kids, we watched them grow into magnificent young adults, I did a ton(ne) more drawing, and of course, I recorded a couple pretty awesome metal tunes, but that is for another story.)
Then back in May this year, I woke to the news that Chris Cornell had died. But wasn't he the same age as me?
I posted on Facebook that when I was in my twenties, I wanted to paint like Frank Frazetta, play basketball like Michael Jordan, and sing like "this guy," and I linked to the video for Black Hole Sun.
And then I listened to a whole lot of Soundgarden.
I rediscovered the reasons why I liked them in the first place, found my copy of Down on the Upside, and gave it a listen. And it wasn't nearly as terrible as I remembered it being. In fact, it was pretty good. Really good. Amazingly good. But I remembered why I was disappointed in it. Side by side listenings of Superunknown and Down on the Upside showed, to my ears anyway, a distinct drop in audio quality, even compared to Badmotorfinger from five years earlier. And in my busy life, that was enough for it to get lost in the pile of cd's.
But now I had time to listen, and the number of songs that I really liked numbered nearly as many as there were on the album. Tighter and Tighter I could listen to over and over and over again. And I did. And it reminded me that the things that are worthwhile just take some time. Sometimes they're just a little bit harder. And when you get past all that, it's what feels right, and was right, all along.
And that is how I found myself staring at that eight yard roll of Strathmore that had been sitting in the corner of my studio for a good five years, probably longer, still in cellophane. I cut off a hunk and hung it on the wall. I grabbed some coloured pencils and my General's pencils and did some preliminary sketching, trying to figure out how I would do this thing that I was about to do. I found the method that worked, and I got started on a portrait of Chris Cornell. After investing a dozen hours or so, it wasn't working out. I gave up. I abandoned it for a couple days, erased some of it, then just started fooling around with it, and I forgot that it wasn't working. With time and effort, and a lot of loud music, it got it to this stage where I can say I'm almost done. Some tweaks and tonal adjustments, and it will get there.
Loud music and drawing faces.
Sleep tight. 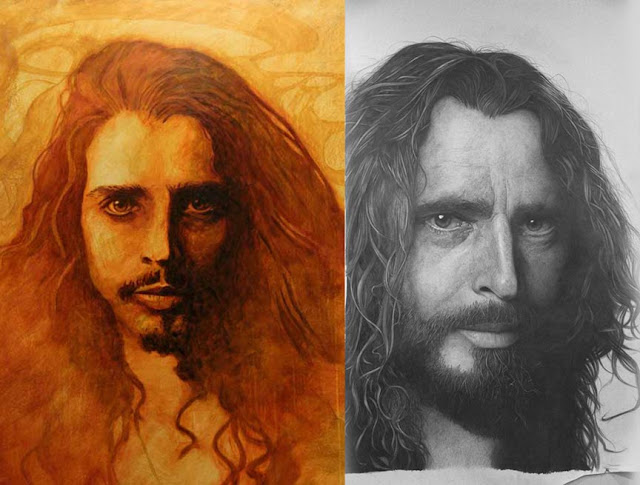