Excerpt from my book about The Incident in Jaisalmer -


We are rarely out late in the evening but tonight our train leaves at 11:30. Streets on the way to the train station are lined with people sleeping under blankets or papers, laying on strips of cardboard.
We get our seats confirmed, numbers 49 to 52, then climb aboard the train. As we settle in, a Tasmanian man and his daughter make their way to our berth. There are two soldiers in seats 54 and 55 who appear to be in the wrong place, as the Tasmanian and a Chinese fellow have those seat numbers printed on their confirmed tickets. The conductor comes by and sorts everything out, and the soldiers move to new seats. The Tasmanian tells a funny story about how everything was going very smoothly up to the point of getting on the train. “We just left our room about 20 minutes ago, got caught up in some kind of procession, but that cleared up quick, no traffic all the way to the station. There’s nobody in line at the enquiries desk so we get our seats confirmed right away, over the platform walkway and down the stairs and our car is right there. We get on board....and there’s a man in my bed. How do you like that?” And he has a gun, I add. “He has a gun!” roars the Tasmanian, and we laugh in a way that releases a lot of the stress accumulated by travelling in India.

This overnight ride is supposed to be only five or six hours, and thank goodness for that as I have never been this cold in my life. All those times as a kid at 6:30 a.m. hockey practice, freezing my toes and crying later when they would start to thaw, I have never felt an all- encompassing cold like this. The temperature probably drops below zero, and had my pre-trip preparation time involved actually removing my long johns and extra socks from my bag and, you know, putting them on, it would be okay. Cold, but manageable. One of the groovy, patterned, but very thin sheets we bought this afternoon is in an open bag, so I pull that out and cover up. At five in the morning, when we should have been arriving in Jaisalmer, we are stopped in the middle of nowhere. For four hours. For whatever reason, we no longer have an engine (Matthew gives me a look), so we wait for another train to come by and connect to our cars (which incidentally have icicles hanging from them) and pull us the rest of the way. It is well after 9:00 a.m. by the time we arrive in Jaisalmer, tired, shivering, and hungry.

We get turned around more than once as Jaisalmer is not an easy city to navigate with a simple guide book map. The Shahi Palace Hotel is well beyond our budgeted amount, but it’s really clean (as opposed to clean-ish), actually kind of stylish, and has a restaurant on the roof that looks directly at the phenomenal Jaisalmer Fort. We’ll take it. We have a late breakfast on the roof while our room is prepared, chat with some other travellers, then step out to get acquainted with the city.
From the outside, the fort reminds us of some of the hill towns in Tuscany, maybe a little rougher around the edges. We have a look at an attractively restored haveli (basically a mansion - out of our price range), check out some prices for camel safaris at local travel agents, then have supper on the hotel rooftop. 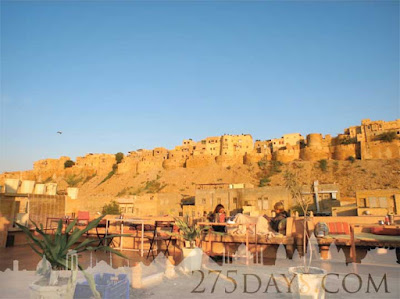 Without heat, and in this temperature, the rooms are a little uncomfortable until we all pile under the covers. Matthew shares with Laura and me, and Jonas gets his own bed. I am asleep before anyone else for the first time in recorded history, but I am also the first one awake at three in the morning, when I find that my stomach and my brain are not cooperating. The feeling in my chest is one that I have not felt in twelve long years.
I am thinking about the Seinfeld episode where Jerry talked about people’s fears, and how the number one fear in America was public speaking, which incredibly, ranked higher than a fear of death. In my case, public speaking also ranks ahead of death in terms of the fear factor, but there is one other thing that ranks above even public speaking. Without being too graphic, I’ll just say it involves the forced ejection of material from my insides in an upward direction. It took about ten seconds of being awake to understand what lay in store for me for the rest of the morning. Having no time for denial or anger, I immediately get into a sitting position doubled over the edge of the bed. With the pain swelling and subsiding, I declare before Vishnu and everyone else that I will never eat train yogurt again, that I will never allow my body temperature to fall below ninety-five degrees for any reason, and that all I want to do is go home. And that is where I settle. Rocking back and forth, I want to be home. I want to be home, I whisper to my knees. Eventually recognizing that there is no evading the inevitability of my destiny, I relent, and allow stomach and brain to work in concert. So again, without being unnecessarily descriptive, it is a short while later that I unintentionally wake up Laura, who does all she can, which quite frankly is nothing, because honestly, what can one do as a bystander in that situation?
I return to a sitting position at the side of the bed, wide awake even though I’m ‘exhausted,’ as I now have two nights of fitful slumber (but less yogurt) under my belt. If  I lay even remotely horizontal, a certain feeling returns, and it’s getting to the point where I’m not sure what’s worse, the fatigue or the feeling.
The rest of the crew is now awake. Battling fatigue and new distractions, I can’t keep The Feeling™ at bay any longer. Jonas tells me it sounded like someone let a rabid animal loose in the bathroom. They decide to go have breakfast without me, and then out to explore the town and that magnificent fort.


I spend the rest of the day trying to expel my inner demon. I am so tired that all I want to do is sleep, but that generally requires some form of horizontality, and well, you know. I end up sitting at the side of the bed with a half dozen pillows on my lap. Leaning forward, I manage at least a few minutes of dreamy doziness, but eventually my fatigue outweighs my fear of the number one fear, and I just need to lay down. I immediately fall asleep, wake up an hour later, and The Feeling is gone. How do you like that?
……
I shake my fist in no direction in particular, and smile.
Ahh, India.
Posted by rey on July 26, 2017