Why is Hate so Popular? Airline Edition

In response to all the noise directed at Delta this weekend, I thought I'd maybe send some praise an airline's way, just to help balance out the universe.

Last fall I booked two tickets, Winnipeg to Madrid return, through KLM who organized the flights for us: Westjet to Montreal, KLM to Amsterdam, and finally, KLM to Madrid. I got such a great deal, I was worried something was going to mess it all up, and since I had several months (six, to be exact) before our flights, I had plenty of time to stew.
A couple days after booking, I got an email from KLM saying they rebooked my return flight to two days later, a Tuesday instead of a Sunday. Since one of us in this two-ticket relationship had to work on Monday morning, this would not work. I was ready to cancel the flight and book a new one, but the cost was about 60% more. Ugh. So I checked out KLM's contact info, and they said to get in touch any time via Twitter. So I did.
I got a near-immediate response, they had a look at the new flight info, and confirmed to me that two days later might put a crimp in our plans, so they set to work trying to make things right. Half an hour later, they sent me new flight info that involved leaving Madrid at 6:00am instead of 9:40 am, not fun, but arriving home at 4:00 in the afternoon (instead of 11:45 in the evening), giving everyone an opportunity to get a good night's sleep before heading off to work the next morning.
Fantastic. I thanked them enthusiastically for fixing this quickly and to my great satisfaction.
The months passed.
When our departure date arrived, I breathed a sigh of relief that nothing else went awry. Before we left for the airport for our morning flight to Montreal, I decided to check my email one last time.

"Your KLM flight Montreal to Amsterdam has been cancelled."
Well, crap.
"KLM is now looking for an alternative…"
We're heading to the airport in ten minutes!
"…or you can choose a new flight yourself online."
In ten minutes!!
Fortunately, before totally freaking out, I read the next email that came from KLM.
"Dear Reymond, Attached to this email is your ticket to Madrid. Enjoy!"
I scanned the email quickly, reasonably certain that I understood it, and forwarded it to my wife's phone (as I live in the dark ages) so we could read all the remaining details later at the airport so we wouldn't be late for the flight to Montreal.

The long and the short of it ended up as follows: The flight to Montreal went off as planned. KLM booked us on an Air Canada flight from Montreal to Heathrow that left an hour later than our original KLM flight, and then an Iberia flight (which we had to run for, through the bulk of Heathrow, but no bother) to Madrid, that got us there thirty-five minutes later than originally scheduled. As I had planned our train out of Madrid at a time that allowed for delays at the airport, we had plenty of time to eat some lunch and explore the beautiful garden at Atocha Station in downtown Madrid. 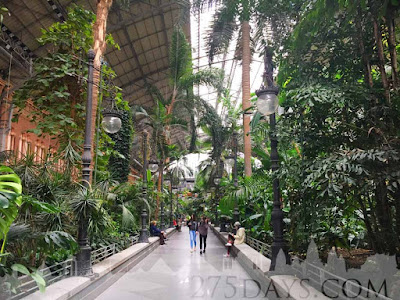 It was a little bit of a crazy day, but KLM took care of us. They had a problem, and they made it right, and they did it with a smile on their face. I'm sure they took a significant loss on this, but they respected their obligation to us.
Thanks in large part to the efforts of KLM, we had a wonderful two weeks in Spain.
So thanks, KLM, from me to you.

ps. Other players in the effort to make our Spain travels enjoyable were:
Loco2.com - a great way to book Spain train tickets online, easily and in English for those of us who are not well-versed in the Spanish language.
Veoapartment.com, where we found our accommodations in Seville and Granada, which were both excellent. 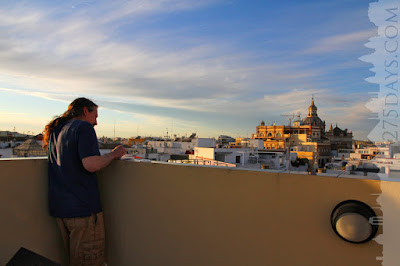 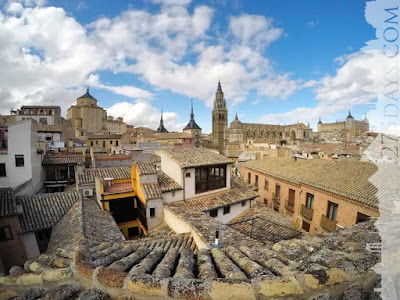 Hertz - rented a car in Seville and dropped it in Madrid; but for a few minor hiccups (someone was training that day so it took a little extra time, and the drop off at Atocha could be better marked or more easily explained when renters are planning to drop a car at Atocha, because Google's directions will take you directly into the taxi area, where the taxi drivers are not easily amused - not that I would know any of this), it was a reasonably streamlined experience.
Alavera de los Baños in Ronda - a fabulous hotel with character and wonderful hosts.
Posted by rey on July 17, 2017