A story from Tuscany.

The guy at the community centre gives me the scoop on why there is no internet in Monticchiello. “Internet not work today. Come from next town, next town not work.” With that out of the way, he invites me for lunch. “Big lunch in church, with whole town. Come, I show you.” In the church’s lower level, long rectangular tables are covered in bright white cloth, fully set, and ready to serve. My new friend shows me the menu, which contains no English words. He recommends two dishes that, in his mind, are superb. See you at noon, I say.

“There is no room,” we are told when we arrive a few minutes ahead of schedule. We can come back for the dinner seating, I say. We’re just around the corner. “No, maybe there is room,” someone says, and that is followed by a flurry of activity. A table is added at the end of a row, along with four chairs that look like they were in the church’s garage sale pile.
I point out the two menu items like I’ve ordered them a hundred times before, a small and a large plate of each, and the server compliments me on my choices. Wine and water first, then the spaghetti-like dish arrives. The pasta is thick and fresh, and full of flavour. The four of us hover over the two plates until the second dish arrives. It has an interesting texture, and what can best be described as a full-bodied flavour. Jonas and Matthew try small fork-fulls, then wrap their arms around the spaghetti plates like alpha wolves who haven’t eaten in a week. Rats.
Laura asks the server what the dish is. He starts to say something, then says, “I will go back and ask so I can tell you exactly and correctly.” Okay. We’re thinking octopus, maybe squid, one of those chewy, fishy things. When he returns, he says, and this is a quote, not just a vague recollection that gets the gist of things, but the exact words, “Precisely, it is the cut up strips of the stomach of the cow.” He notices the shock that registers on our faces, and says quickly, “It is good?” Laura replies, It is different, in that sing-songy kind of way that let’s you know that while not an outright falsehood, she is not being entirely forthcoming. “Yes, it is different for you, for sure.”  As soon as he leaves, Matthew and I turn to one another and say at the same time, Which one of the cow’s stomachs is this?
Okay, we just paid fifteen euros for two plates of cow stomach. I have a tendency to work harder when things get physically tough, because that’s my arena. I thrive in circumstances that require endurance and strength. Not feeling well? Go play hockey, that’ll clear the sinuses. Tough hill to climb? I’m gonna run it. Your backpack getting heavy? Let me carry it for a bit.  I am particularly gifted in this department when there is a food element involved. Throw fifteen euros of cow stomach on the table, ha! You don’t know who you’re dealing with, Italy!
I dig in with gusto. I have a full glass of wine, enough water to fill my cup a few times, some bread, and some cheese that I think was meant for the spaghetti, not the trough de vache. But this flavour is like a cumulative entity, and after not too long, I can feel the beginning of the end. I put forth a valiant effort, with my back to the wall I give a hundred and ten per cent. I am in Italy, so I go to the mattresses. Wine, water, bread, and cheese disappear at a dizzying pace, and the boys watch my performance with smiles and snorts of laughter. Laura puts no stock in efforts like this, no matter how Herculean. Nor is she about to waste time putting a cow’s stomach into her own. It’s not about the stomach, I preach. We’re a team, and I’m not giving up on the team, we are finishing our meals. She rolls her eyes, in that loving, ‘You’re an idiot, but you’re my idiot’ kind of way.
Alas, with three forkfuls to go, I have no more wine or bread, and my water supply is dangerously low. I am done. I make a big show of shedding a phony tear, and apologize to my family. The boys giggle quietly until real tears come out of their eyes, but Laura is already heading out the door, pretending not to be associated with us.

Laura and I enjoy a quiet afternoon at the apartment, while Jonas and Matthew pretend to be spies and explore Monticchiello with our walkie-talkies.
In the evening we pack our bags again, and recall our favourite memories of the week. Jonas’s still nail-less fingertip looks a little better every day. And tomorrow, we leave for Florence. 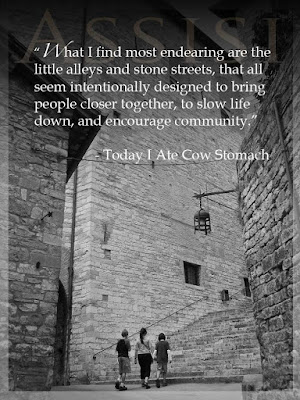