How to Operate a Rickshaw

After a rather relaxing, although relatively sterile, group tour, we arrived back in Kolkata in the evening. The company bus dropped us off at our original departure point, Priya Cinema, and we bid good bye to new friends made during our time together seeking out the person-eating tigers (I think they mostly ate men, but I don't think they would be particularly gender specific) in the mangrove swamps of the Sundarbans National Park. 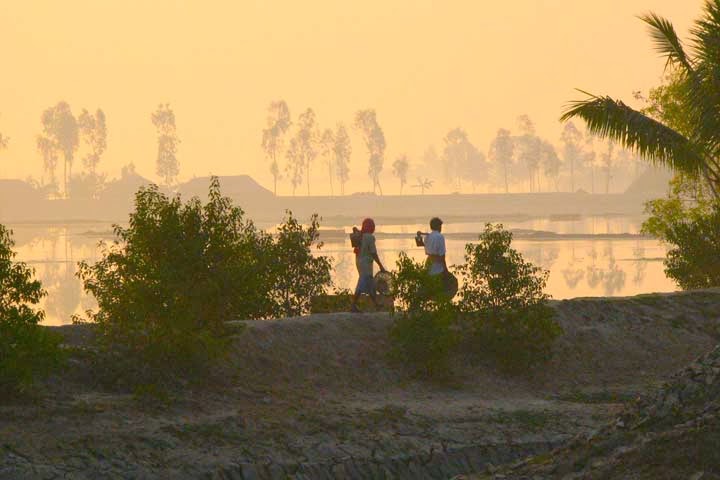 We wrangled a cab to take us back to our hotel, the appropriately named Tourist Hotel on Sudder Street. There was a lot of traffic, not an uncommon occurrence in Kolkata or apparently to our driver, so at convenient intervals, usually intersections, we simply drove on the other side of the road. In Canada, as in many other countries I'm sure, such action would have resulted in death, dismemberment, bad feelings, and maybe some fisticuffs. In India, opposing traffic simply accommodated our oncoming vehicle. What was once five rows of traffic in four lanes became five rows of traffic in three and a half lanes of space, our taxi occupying the remaining half. We were actually driving on the other side of the concrete median for some time down Jawaharlal Nehru Road, not an insignificant street. Fortunately, the constant bleating of the horn warned anyone who was listening that we meant business, and were not about to be chased across the median by five columns of onrushing steel boxes
The following day we had planned to go see a movie called Jodha Akbar as the posters on display looked pretty cool. 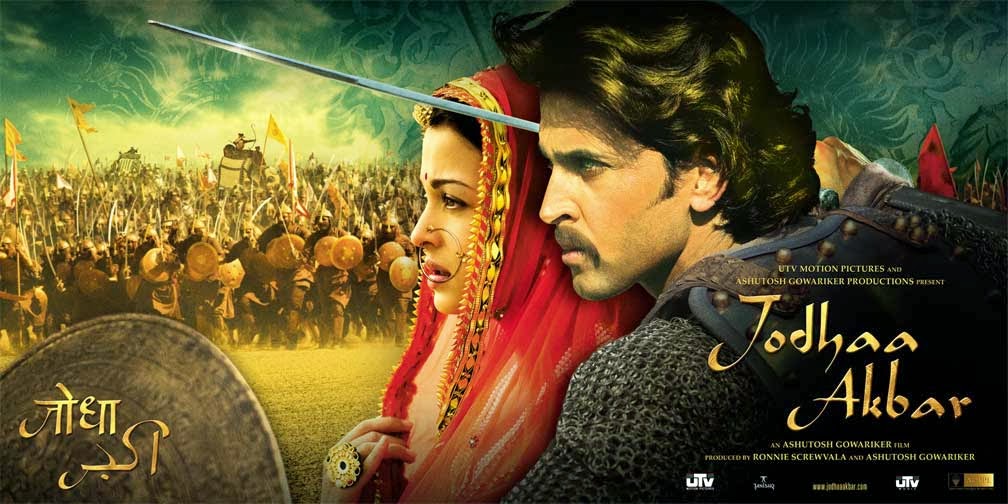 Unfortunately that cool movie was this day replaced by some lame Hollywood shoot'em up. With some time to wander, we take to the back streets and within moments strike up a conversation with a middle aged man with an unshaven face and a warm smile. We talked for over half an hour in the blazing hot sun. As I was wearing pants, it was none too comfortable. I could feel the sweat running down the backs of my legs, sweat was dripping down the man's forehead, but we were so engaged we just kept on talking. Arranged marriages, Canada's cold weather (I love how people react when I say, "forty BELOW zero"), how much my camera cost, family life in India vs. in Canada and how priorities were different here. Meanwhile Jonas and Matthew spent some time trying to coax the dogs out from behind some scooters. Be careful, my eyes told them. 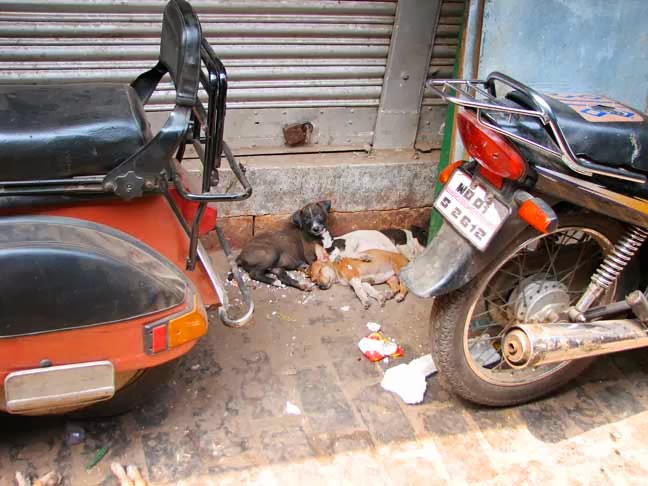 All in all, we must have been pretty entertaining as by the end a dozen or so people had gathered around us to listen in. The man eventually got around to inviting us to his shop, but he seemed to have a much more genuine nature than some other 'shop owners' and feels a bit more legit, so we followed. 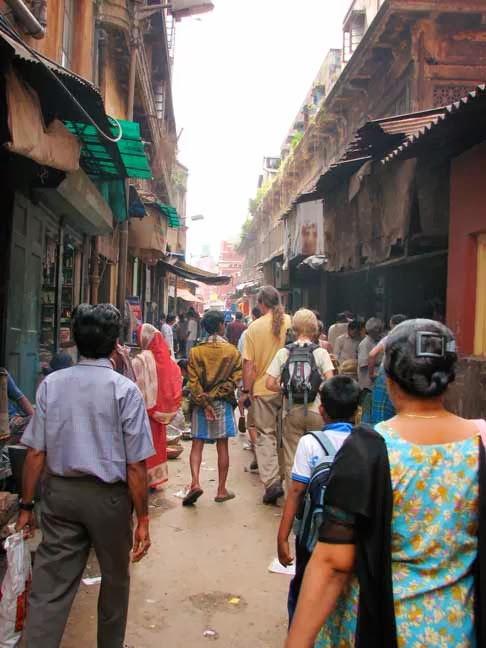 We headed down a slender, crowded alley, hidden from the sun by buildings and tarpaulins. Why couldn't we have talked here? my body said. We were barely a hundred yards from the Newmarket area [a mall and newer stores] but we might as well have been a hundred years away. Tiny lanes filled with authentic shops,  men squatting, crushing cinnamon in metal containers with thick plungers, other men using ice picks to drag blocks of ice from here to there, spice shops lining both sides of one lane so that it smelled otherworldly. 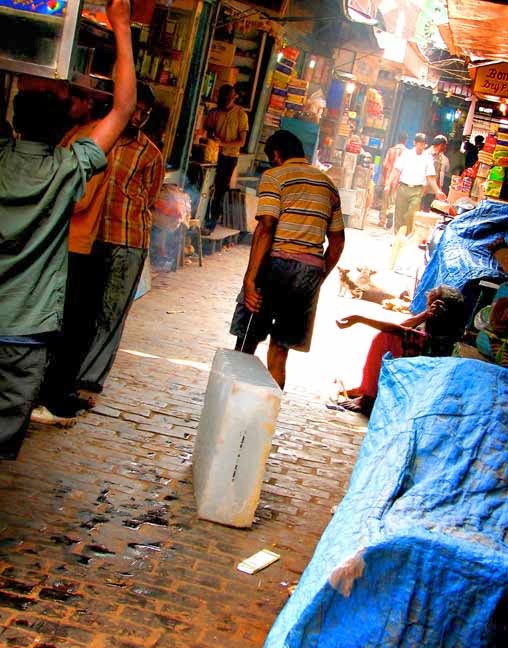 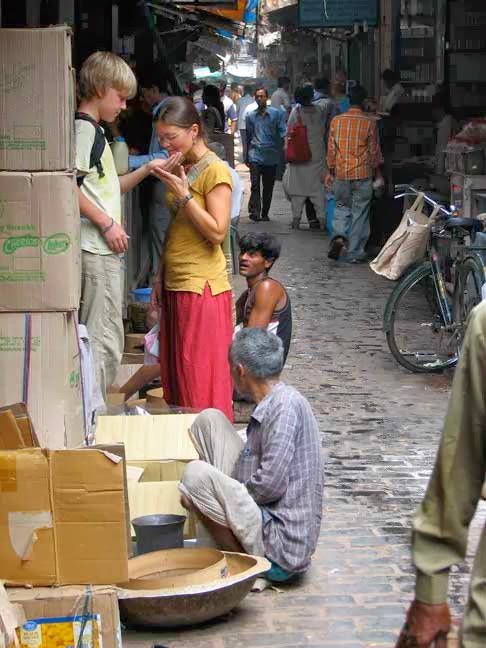 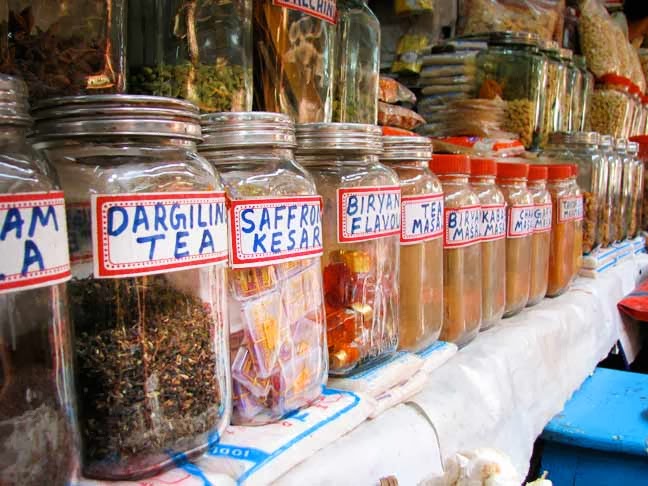 "Remember this smell, " Laura said to the boys, "because you can't take a picture of it."
Matthew immediately pulled twenty rupees out of his pocket and bought a small bag of cinnamon. His clothes will smell delicious when we get home. 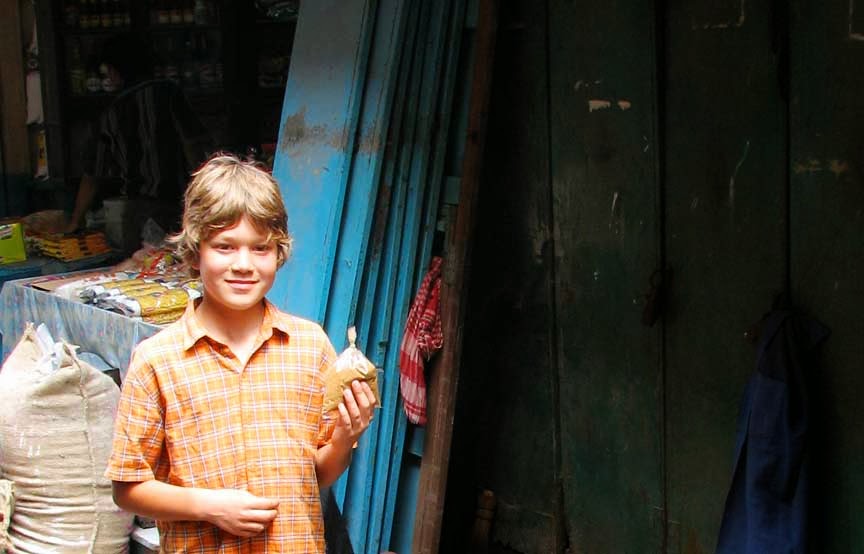 Matthew was standing beside one of the cinnamon men, and I motioned to the man with my camera. He gave an agreeable nod, and I put the camera to my face. This is going to be an amazing drawing, I breathed, as I clicked the shutter. He smiled in a way that made me forget where I was, forget what we were doing, and I could only see the world as a drawing with the cinnamon man. 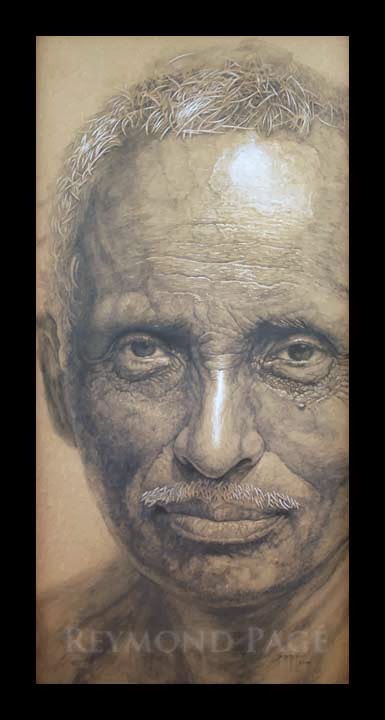 Laura bought a bag of a masala tea from the friendly shop owner and he invited us to take a photo of him and his son. Everyone posed for the picture, and he handed us an address and asked that we send the photo to him. We lost the address a few days later, but in typical Canadian fashion, are now bound by guilt to return to that alley in Kolkata one day and present him with the photo. 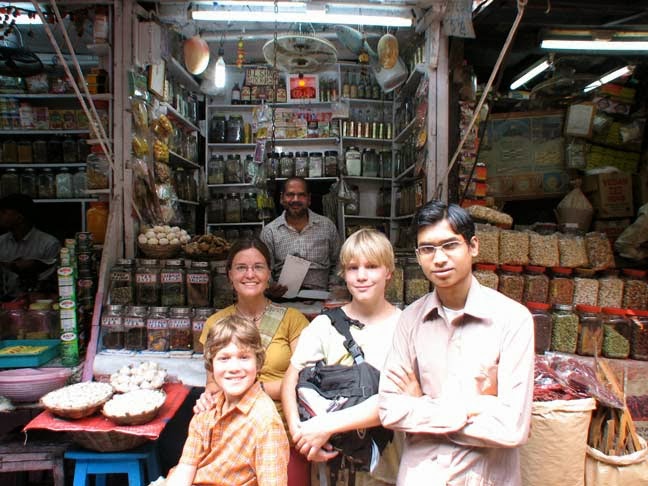 After a little more meandering we came across a man and his old fashioned (it may very well have been quite new, it just seemed old to us) running rickshaw. He facility with English was far superior to our acuity in any Indian language or dialect, but we managed to have a great deal of fun. He talked/mimed about how the city of Kolkata was going to ban the use of his rickshaw in favour of cycle rickshaws, as the running rickshaw was deemed to be "inhumane." He explained/showed, with the help of others who had now gathered to see what those dopey Canadians were up to, how it was much harder to to operate they cycle version when you actually had to pull people around, which was sort of the whole point of the job. He got Laura to hold the handles and he jumped into the seat and motioned for Laura to pull him around. 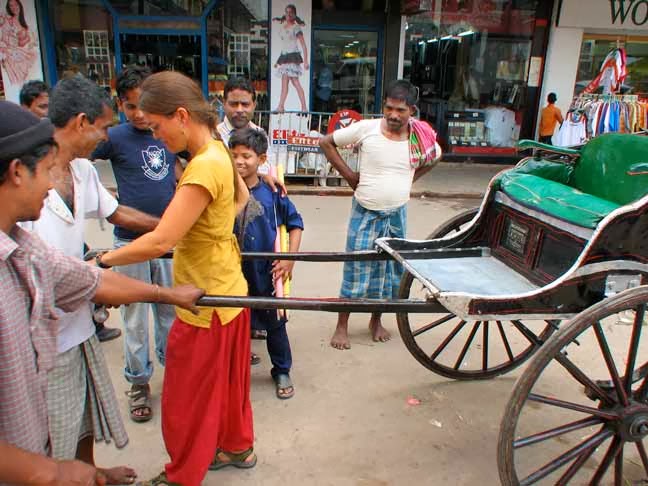 Laura was immediately convinced as his rickshaw was perfectly balanced and easy to manoeuvre. With bodies loaded on to the cycle rickshaw, it was very hard to pull, particularly in the congested traffic of downtown Kolkata. I noticed that he was barefoot and made motions noting how my pampered North American feet would not last a minute on theses roads. We shared a lot of smiles and laughter. 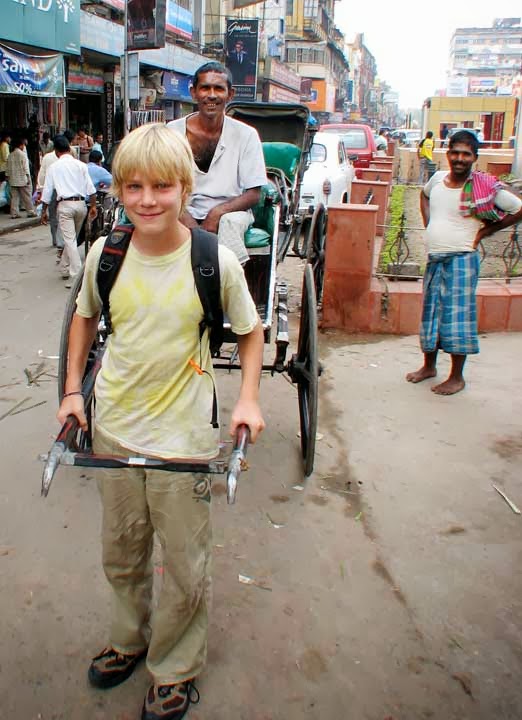 On the way back to the hotel, we came across a bookstore that sold only computer books. Jonas found a book on HTML and CSS programming. I told him that if he wanted it, we would be happy to buy it for him, but I certainly wasn't going to be carrying it anywhere. Despite the fact that books printed for the Asian market are a fair bit cheaper than in North America, the shopkeeper knocked ten percent off the price when I told him it was a birthday present for Jonas. When he gave me change, a quick calculation revealed that he gave an additional discount as well. Before leaving the store, we met up with Ian, a friend we met while in Varanasi ten days earlier, and talked for a while about our experiences over the last while.

In the late afternoon, we we checked out of our hotel. I handed a ten rupee note to the porter type guy who was standing by the door, another to the kid that cleaned the halls who appeared moments after the ten rupee note, and another to the old man sitting on the front steps because the kid brought me out and presented the man as another worthy recipient of my change. I wasn't sure what the man's role was in the operation of the hotel, but he was on the steps all the time and appeared to see everything.

We were booked into a four bed room at Hotel Airways. We were flying to Bangkok early in the morning, and were told it would be wise to be closer to the airport as morning traffic could be unpredictable. From the Tourist Hotel, it was a long drive to Hotel Airways, close to an hour, even in the light evening traffic. It was well after dark when we arrived, but things at Hotel Airways were somewhat amiss. Our first clue was them showing us a small closet which contained a single bed. At the desk again, Laura showed the clerk her name and the number "4" written beside it.
"There are four of us," Laura said, pointing to each of us in turn.
We are walked over to their "sister" hotel but they wanted to give us a double room for twice the originally quoted price. We tried to convince the clerk to understand that it might be in their best interests to at least attempt to accommodate us, but he just stood there looking uncomfortable. We asked him to call the manager, but he said he couldn't….ahem….get a hold of him. We did our best to negotiate and he relented and offered us a single and a double room for more money again, but I wasn't feeling comfortable being split up in a place that conducted business like that. We probably went back and forth for forty five minutes, but to no avail, our voices steadily rising throughout, he wouldn't budge. Finally, we decided to have a look at the double room he offered earlier.
"It's already rented," he said.
It was at that point that I suddenly began to see things in a clearer light. We were not getting a room here. We had a few choice words for the guys now gathered behind the desk, told Jonas and Matthew to get their backpacks on, and we headed out the door. We walked about ten feet to the hotel next door, and immediately got a three bed room, tiny and unkempt. I think if we had known how easy it would be, we would have been here an hour ago. The stupid thing was, after we got checked in at Hotel Continental (is that hair on my pillow??), it was after nine o'clock, and we would need to be up at three o'clock to head to the airport. 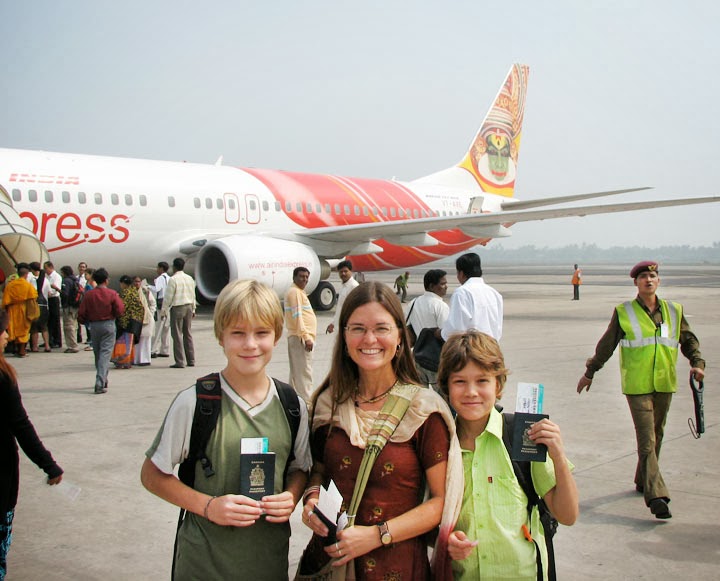 When I look back on that night, a lot of the nuttier stuff that had gone on over the previous seven months comes to mind, and I am amazed at how well Jonas and Matthew have dealt with things. While we argued our case without the hotel clerk, quite strongly at some points, they sat calmly and read a book. While I took my complaint with a rickshaw driver out of the rickshaw and into a nearby shop, they sat and watched the colours of Varanasi. As Laura and I scoured the Cairo airport looking for any flight headed towards India, they sat alone with our bags, reading, guarding, playing knuckles. They placed their faith in us, and it's as though all our time on the road had prepared them for everything they would face, and they just took it in stride. Everything had worked itself out to that point, and judging by their expressions, everything would continue to work. They believed it, they believed in us, and that fills me with great joy. 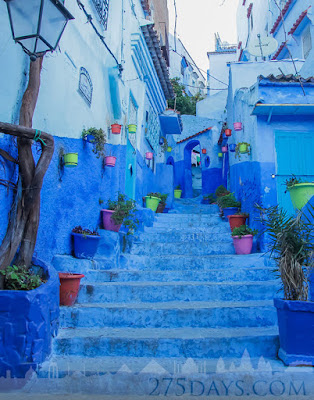 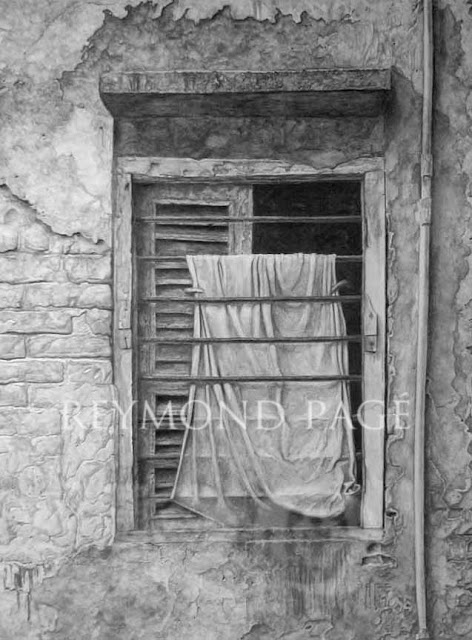